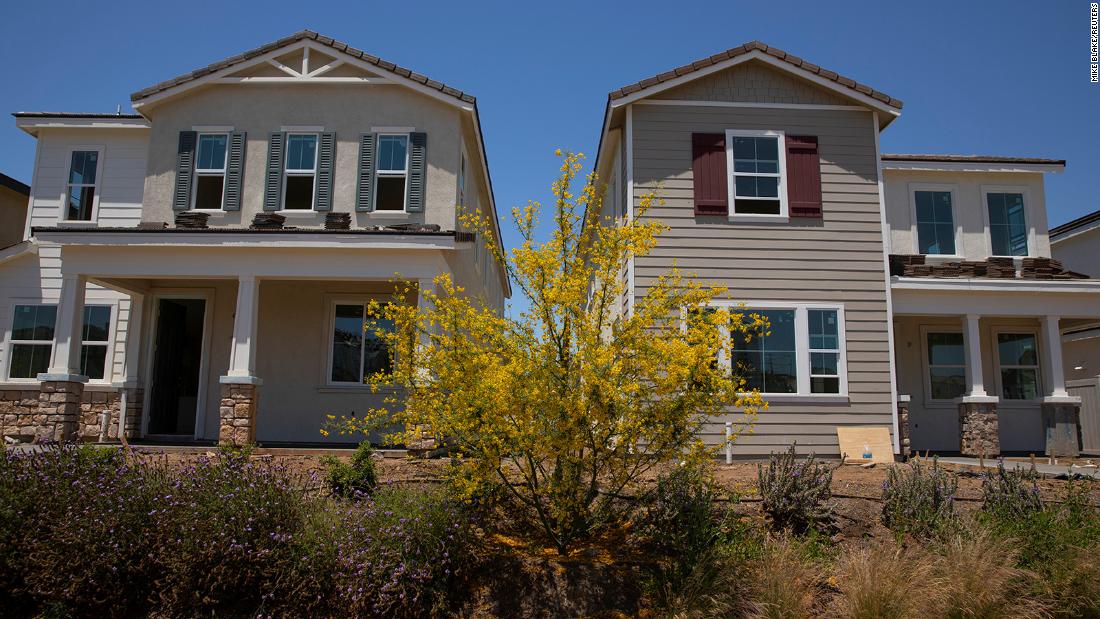 Rents have risen by double digits in some cities. Meanwhile, buying a house is the most unaffordable since the mid-1980s. Mortgage rates have climbed above 6% and house prices remain just outside the record highs of recent months, pricing many potential home buyers out of the market.

And while there are some signs of cooling in the market, it doesn’t look like much relief will be in sight for home buyers.

Today, a homeowner buying the average-priced home, which is now $396,300, with a mortgage at the current average of 6.29% would pay $1,960 per month in principal and interest. That’s $752 more per month.
With inflation pushing up most household spending, few would-be homebuyers can afford those more expensive monthly payments.

Over the past five years, the median home price has increased by 60%, while median incomes have increased by less than 15%, said Andy Walden, vice president of business research at Black Knight, a mortgage database company.

Americans now spend more than 35% of their median income on monthly principal and interest payments on that newly purchased mid-price home. Historically, Americans spent nearly 25% of median income on payments.

To get back to that level, Walden said, a combination of these things would have to happen: a person’s income would have to grow 40%, the mortgage rate would have to be cut in half, or there would be a 30% drop in the average. price of a house.

But none of those things are likely to happen any time soon.

How did we get here?

Part of the reason homes have become so expensive is that record low mortgage rates during the Covid-19 pandemic boosted demand for homes, which in turn pushed prices up. With multiple buyers competing for a limited pool of homes for sale, bidding wars and cash offers became common, pushing prices to record highs.

Now buyers are struggling with a combination of high house prices and rising mortgage rates.

“The pain point came when rates returned to their 6% level,” Walden said.

The other side of the problem is supply. Enthusiastic buyers faced a nationwide housing shortage that had been long in the works, creating a supply-demand mismatch that pushed home prices up.

According to the National Association of Realtors, the U.S. has fallen behind by about 5.5 million homes in the past 20 years because builders failed to keep up with historic building trends. If you include the destruction of property due to demolition or natural disasters, among other things, the total deficit over that time could be closer to 6.8 million.

The shortage of units is so great that it would take more than a decade to catch up, according to NAR.

But even if more houses and apartments are built, it doesn’t matter unless people can afford them.

In April 2021, a household had to earn about $80,000 a year to afford the median-priced home with a modest 3.5% down payment. A year later, the income requirement was $108,000. This cost increase means that about 4 million tenant households that could have bought the median-priced home last year were unable to do so 12 months later, according to Harvard University’s Joint Center for Housing Studies.
Without a home to bribe, tenants are left stranded, driving rents up even further in an already tight market.
Cities in the Sun Belt, such as Phoenix and Austin, saw some of the largest increases in housing costs during the pandemic. In Miami, according to Realtor.com, home prices are up 33% from a year ago, and rents are up 17% from last year. But the affordability crisis is playing out nationwide, in all regions of the country.
As renters reach the limit of what they can afford each month, home ownership becomes further out of reach as they struggle to save for a down payment. This widens the wealth gap and closes inequalities between those who benefit financially from home ownership and those who do not. It also widens the racial home ownership gap, with 72% of white Americans being homeowners, while only 43% of black Americans own a home, according to NAR.

So what happens next?

There are clear signs of cooling in the housing market. Home sales have been falling for seven straight months as the rising costs of buying and financing a home push more people out of the housing market. Typically, prices will fall as demand dries up and eventually mortgage rates will settle.

For now, however, mortgage rates are likely to rise further as the Federal Reserve continues to raise interest rates in its battle to fight inflation.

The Fed does not directly determine the rate that borrowers pay on mortgages. Instead, mortgage rates track the yield on the 10-year US Treasury. As investors anticipate the Fed’s rate hikes, they often sell Treasury bonds, raising yields and thus mortgage rates.

Most housing policy experts say building a steady supply of new, reasonably priced homes is necessary to solve the affordability crisis. But because those homes aren’t as profitable for builders as larger, more expensive homes, it will require a concerted effort from both the public and private sectors.

In May, the Biden administration announced a housing provision action plan to close the affordability gap and lower housing costs. The plan aims to increase the supply of affordable housing by improving existing federal funding and incentivizing areas to reform zoning and land use policies to build more cheaper housing. It also calls on homebuilders to adopt more efficient construction methods.

But none of this is a quick fix, and some of it will require Congressional action.

Separately, the Federal Housing Finance Administration, which oversees mortgage giants Fannie Mae and Freddie Mac, announced plans this summer to expand home financing options for buyers, especially those of color, to close the racial homeownership gap. These programs include down payment assistance, lower mortgage insurance premiums, and a credit reporting system that takes into account the history of rent payments.
Some of these ideas, including new no-deposit loans with no closing costs for buyers in specific black or Hispanic neighborhoods, are already in place.