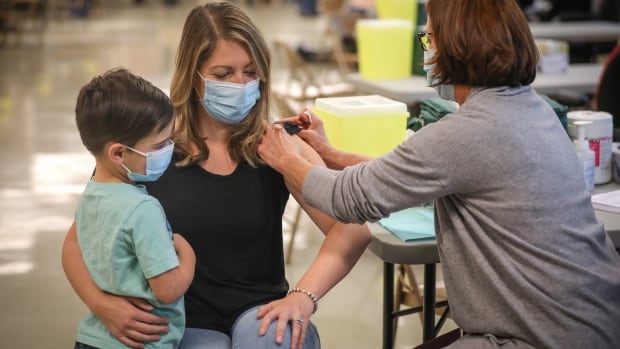 A day care center in Regina says the current flu season is even worse than when “we were in full COVID.”

“People were isolating and everything at the time, but now everyone is back,” said Megan Schmidt, director of the First Years Learning Center.

“It seems like everyone gets it all. I don’t think there’s anyone who hasn’t been hit by the flu,” Schmidt said.

Pandemic precautions have prevented the spread of COVID and respiratory viruses for nearly three years. Flu levels nationwide were exceptionally low until early 2022, and respiratory syncytial virus (RSV) infection rates were near zero for months.

But now Canada faces a triple virus threat as COVID-19, flu and RSV continue to spread.

According to the Public Health Agency of Canada, the Prairie provinces have the worst rates of positive flu tests FluWatch report from November 6 to November 12. Nearly a third of the tests came back positive (28 percent).

Adam Ogieglo, a family physician in Saskatoon, is not surprised by the high positivity rates.

“I think in the last two or three weeks, essentially every Pap test I’ve done, but one, has come back positive for influenza A. So we’re definitely seeing those metrics come out in real time in our clinic.”

He said people seeking help at the urgent clinic wait four or five hours to see a doctor or are turned away altogether by the end of the day.

“People are struggling to access care and we are being bombarded with disease,” he said.

Dr. Lynora Saxinger, an infectious disease specialist at the University of Alberta, says the western provinces normally get an earlier flu season than the rest of Canada because school starts earlier and the climate is drier.

“Once it’s introduced to a region, they start to experience their epidemic,” she said.

But as many people have managed to avoid getting sick in recent years, Saxinger and other experts say people’s immunity has declined.

“What we have is a population that really doesn’t have much immunity to partial flu exposure or partial immunity to more recent vaccination, so it’s a little bit more of an aggressive uptick because people are so much more susceptible,” Saxinger said. .

Young people are hit the hardest

According to PHAC, children age four and under currently have the highest hospitalization rate due to the flu.

So far, Schmidt says, no children at her daycare have been hospitalized because of the flu this year.

“I just hope it stays that way,” she said. “We’re urging parents to try and let them sleep in if they need to, or we might try to give them an extra long nap here if they need it, because we just have to avoid the hospital.”

emergency room waiting times, especially in children hospitals is increasing across the country.

In Saskatchewan, 16 people were hospitalized due to flu from Oct. 30 to Nov. 5, according to the county’s Respiratory Disease Report. Four were admitted to intensive care.

According to the county, most flu hospital admissions and ICU admissions are those 19 and under and those 60 and over.

According to provincial data, less than 18 percent of Albertans have the flu shot.

Saxinger says people have gotten out of the habit of getting their flu shot during the COVID-19 pandemic.

“I think it’s flown under the radar a little too much and we’re behind on the vaccination,” she said.

Canada’s Prairie region is an early flu hot spot, with a test positivity rate of 28 percent. Experts blame low vaccination rates and years of pandemic protection that have left the population with lower immunity, and children may be most at risk.

In other years, according to Saxinger, 50 to 60 percent of the population would get the flu shot.

Saskatchewan’s flu vaccination campaign kicked off on October 11. Fifteen percent of the population received the flu vaccine as of Nov. 5, according to the county’s report.

That’s a 28 percent drop in coverage compared to the same time last year, the report said.

The Prairie provinces, like others, have had no provincial health mandates for months. Mask use has not been mandated in Saskatchewan since late February, but the rapid surge in flu and RSV has renewed calls from some frontline workers to reinstate mask mandates to ease pressure on the healthcare system.

The top doctors in British Columbia, Ontario, Quebec, Alberta, Manitoba, Saskatchewan, Prince Edward Island and Newfoundland and Labrador have all said now is not the time to reinstate mask mandates, but continue to recommend masks to slow the spread of viruses.

Ogieglo encourages people to wear masks indoors, stay home if sick and get their flu shot and COVID-19 booster

“When you walk into our clinic and see the lineup that stretches around the building [waiting] to be seen, then I think it makes sense that we might need to work together to protect the integrity of our healthcare system,” he said.