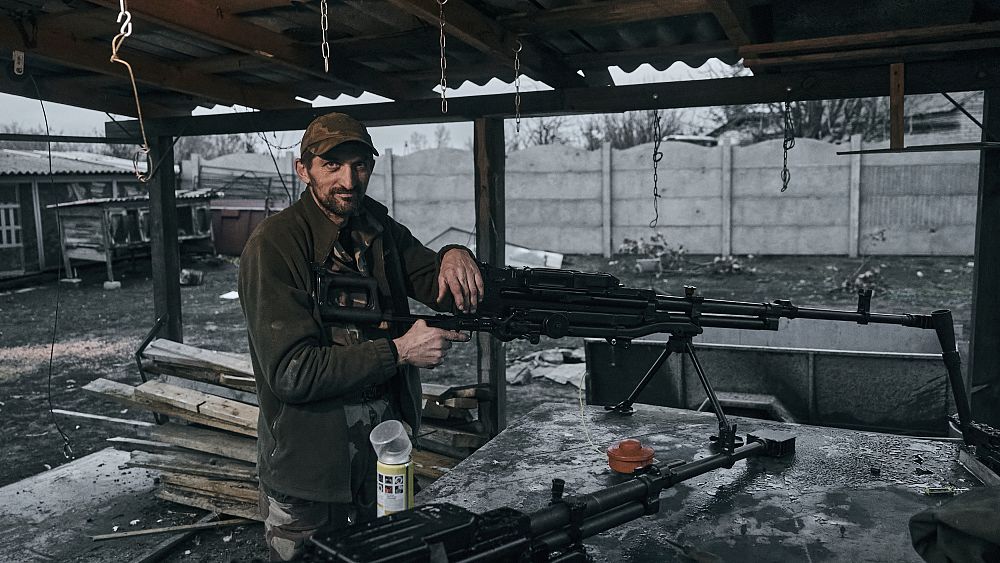 1. Ukraine searches monastery in Kiev for suspected links with Russia

The Ukrainian security service (SBU) has raided the main Orthodox Christian monastery in Kiev over suspected ties to Russia.

The SBU said on Telegram that it had conducted “counterintelligence measures” at the 1,000-year-old Pechersk Lavra complex on Tuesday morning.

The operation was designed to “counter the subversive activities of the Russian special services in Ukraine,” it added.

The searches were carried out in cooperation with Ukrainian police and the national guard, the SBU said. Worshipers were allowed to continue praying at the monastery, but were subject to SBU security checks.

“These measures are implemented to prevent its use [of the monastery] as the center of the “Russian world,” the SBU said.

The Pechersk Lavra is the oldest monastery in Ukraine and has been on the UNESCO World Heritage List since 1990. It is also the headquarters of the Russian-backed wing of the Ukrainian Orthodox Church.

The Moscow branch of the Ukrainian Orthodox Church maintained close ties with Russia until May, after the invasion of Ukraine.

Two similar raids were also made on monasteries and Orthodox Church properties in the northwestern Ukrainian region of Rivne.

Kremlin spokesman Dmitry Peskov has condemned the raids as “military action against the Russian Orthodox Church”.

The Russian Orthodox Church has also described the searches as an “act of intimidation”.

2. Ukrainians may have to live with blackouts until March

The head of a major Ukrainian energy supplier has warned that citizens will likely have to live with blackouts until the end of March.

Sergey Kovalenko, head of the YASNO, said on Facebook that workers were rushing to finish repairs before winter sets in.

“Stock up on warm clothes and blankets and think about options that can help you wait out a long power outage,” he said.

According to President Volodymyr Zelenskyy, half of Ukraine’s energy infrastructure has been damaged by Russian attacks.

In his late-night speech on Monday, Zelenskyy also appealed to Ukrainians to conserve energy.

Amid frequent blackouts, millions of people are left without electricity and water as winter sets in and temperatures plummet below freezing. Grid operator Ukrenergo said more scheduled shutdowns are planned for Tuesday.

“The magnitude of the destruction is colossal,” said Volodymyr Kudrytskyi, CEO of Ukrenergo.

“In Ukraine, there is a shortage of power generation. We cannot generate as much energy as consumers can use.”

Kudrytskyi added that rising temperatures after Wednesday should provide Ukrenergo with an opportunity to stabilize the power generation system.

The Ukrainian government has begun evacuating civilians from the liberated city of Kherson, which is largely without electricity and running water. Kherson residents can apply to be transferred to areas where heating and security issues are less acute.

“Given the difficult security situation in the city and the infrastructure problems, you can evacuate to safer regions of the country before winter,” Deputy Prime Minister Iryna Vereshchuk said on Telegram.

Moscow says the attacks on Ukraine’s energy infrastructure are a result of Kiev’s unwillingness to negotiate.

Russia has targeted Ukrainian energy facilities after a series of battlefield setbacks, including its withdrawal from Kherson to the eastern bank of the Dnipro River.

3. Ukraine’s health system is facing “the darkest days of the war yet,” WHO says

The World Health Organization’s regional director for Europe has issued a stark warning after a visit to Ukraine.

Up to three million more people could leave their Ukrainian homes this winter in search of warmth and safety, Hans Kluge said.

“Ukraine’s health system is experiencing its darkest wartime days yet,” Kluge said in a statement.

“Having endured more than 700 attacks, it is now also a victim of the energy crisis. Access to healthcare cannot be held hostage,” he added.

The WHO says hundreds of Ukrainian hospitals and healthcare facilities lacked fuel, water and electricity to meet people’s basic needs.

“We expect another 2-3 million people to leave their homes in search of warmth and safety,” Kluge said.

“They will face unique health challenges, including respiratory infections such as COVID-19, pneumonia, influenza, and the serious risk of diphtheria and measles in the under-vaccinated population.”

The UN health organization has called for the creation of a “humanitarian health corridor” for all areas of Ukraine recaptured by Kiev, as well as areas occupied by Russian forces.

Ukrainian investigators said they have arrested a Russian official from the pre-trial detention center in Kherson for “treason”.

The suspect is accused of letting Russian prisoners of war escape before Kiev recaptured the city.

“From the first days of the occupation, this employee of a detention center worked for the invaders,” the SBU said in a statement.

“[They were] responsible for the pre-trial detention centers and the places where sentences are carried out,” it added.

According to the SBU, the suspect “didn’t have time to escape” when Kyiv’s armed forces liberated the southern city on November 11. If the suspect is convicted of treason, he risks a life sentence.

Earlier this month, the SBU also arrested a suspected Russian soldier allegedly “disguised as a civilian” in Kherson.

Fighting continues on the ground in eastern Ukraine, where Russia has mobilized its troops from Kherson.

The General Staff of the Ukrainian Armed Forces said on Tuesday it had repelled numerous Russian attacks in several areas in the Donetsk region.

“The enemy does not stop shelling our troops’ positions and settlements near the line of contact,” it claimed. “Attacks continue to damage critical infrastructure and civilian homes.”

In the Ukrainian-controlled areas of the Donetsk region, four people have been killed and four others injured in the past 24 hours, regional governor Pavlo Kyryleno said on Telegram.

Russian missiles also reportedly hit a humanitarian aid distribution center in the Zaporizhia town of Orihiv, killing one person and injuring two others.

According to regional governor Oleksandr Starukh, the attack allegedly took place near the Zaporizhia nuclear power plant. Russia and Ukraine have both accused each other of firing grenades near the factory.

Authorities in the Russian border region of Belgorod have also claimed that three people were killed in strikes on Tuesday.

5. The Polish president spoke to Russian pranksters after the explosion of a missile

Duda’s office confirmed on Tuesday that he had been transferred last week to a person claiming to be French President Emmanuel Macron and that he had given the caller sensitive information.

Two people were killed by a rocket blast in the Polish border village of Przewodow on November 15. NATO Secretary General Jens Stoltenberg has said the missile appeared to have been accidentally fired by Ukraine’s air defenses.

A seven-minute video on YouTube shows two Russian pranksters — known as Vovan and Lexus — talking to Duda in what appears to be a French accent.

The Polish president can be heard explaining details about the missile incident and his concern not to exacerbate the situation with Russia.

Duda’s office says the joke was one of many calls he received just after the missile strike.

“During the call, President Duda realized because of the caller’s unusual way of conducting the call that there may have been an attempted deception and ended the call,” the office said. wrote on Twitter.

The same Russian pranksters had previously spoken to Duda in 2020 while posing as UN Secretary General Antonio Guterres. Two officials from Poland’s mission to the UN were fired over the incident.

An investigation into the latest gag is underway, Duda’s office said.

Vovan and Lexus have previously targeted other European politicians and celebrities with prank calls, including British Defense Secretary Ben Wallace.

Berlin had offered the air defense system to help Warsaw intercept missiles after last week’s deadly attack in Przewodow, which had raised fears that the war in Ukraine could spill over into NATO territory.

“The German Defense Minister has confirmed its willingness to deploy the Patriot launcher to the border with Ukraine,” Polish Minister Mariusz Blaszczak wrote on Twitter.

“The version of the system has yet to be determined, as well as how quickly they will reach us and how long they will be stationed.”

The government of Ukraine says it has received a new package of financial aid of 2.5 billion euros from the European Union.

“We plan €18 billion for 2023, with regular cash disbursements for urgent repairs and rapid recovery leading to successful reconstruction,” she added.

“We will continue to support Ukraine as long as it takes.”

Ukrainian President Zelensky said on Twitter that he was “grateful” for the new tranche of aid in the run-up to the winter.

Prime Minister Denys Shmyhal added that the aid was “another step of solidarity”.

The international community has also stepped up its aid to Moldova amid an energy crisis.

On Tuesday, Russian gas giant Gazprom threatened to cut off gas supplies to Moldova, accusing Ukraine of siphoning the pipeline that runs through its territory.

According to Gazprom, Ukraine illegally accumulated 52.5 million cubic meters of gas in November by “breaching” part of the deliveries to use it for its own purposes.

The Russian giant threatened to “reduce gas supply” from Nov. 28 as temperatures plummet and demand for gas rises.

Before the invasion of Ukraine, Russia was the EU’s largest supplier of gas, but the EU has since significantly reduced its imports to less than 10% of all imported gas.