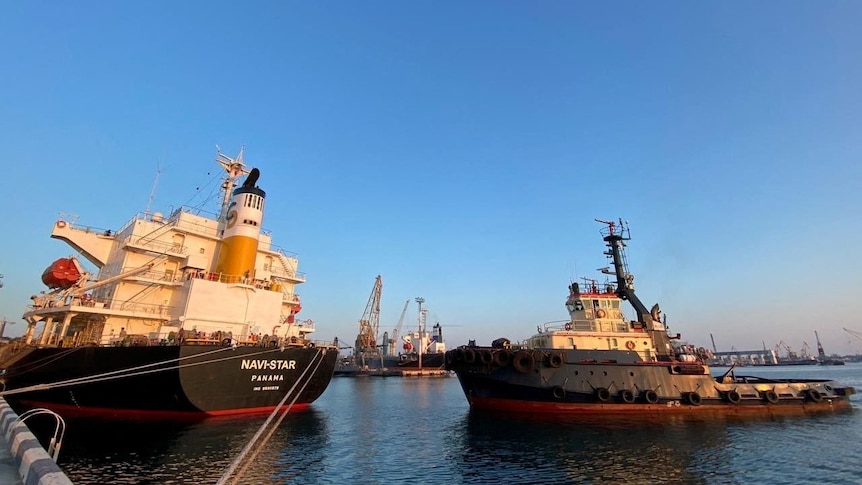 According to the Turkish defense ministry, three ships loaded with grain have left Ukrainian ports under a recently signed deal allowing safe passage.

The first grain ship to depart from a Ukrainian port since the start of the Russian invasion departed Odessa on Monday.

“We expect that the security guarantees of our partners from the UN and Turkey will continue to work and that food exports from our ports will become stable and predictable for all market participants,” Ukraine’s Infrastructure Minister Oleksandr Kubrakov said on Facebook after the ships departed. .

In a rare diplomatic breakthrough in the five-month war, the United Nations and Turkey struck a secure transit agreement between Moscow and Kiev after the United Nations warned of famines caused by the halting of Ukrainian grain shipments.

Ukraine and Russia produce about a third of the world’s wheat and Russia is Europe’s main energy supplier.

On Friday, two grain ships departed from Chornomorsk and one from Odessa, carrying a total of about 58,000 tons of maize.

The Turkish Defense Ministry said on Twitter that Panama-flagged Navistar, carrying 33,000 tons of maize bound for Ireland, was leaving Odessa.

The Maltese-flagged Rojen, with 13,000 tons of maize on board, departed from Chornomorsk harbor en route to Great Britain.

The Turkish-flagged vessel Polarnet, carrying 12,000 tons of maize, departed from Chornomorsk for the Turkish Black Sea port of Karasu.

The Turkish bulk carrier Osprey S, which flies the flag of Liberia, was expected to arrive at the Ukrainian port of Chornomorsk on Friday, the Odessa regional government said.

It would be the first ship to arrive in a Ukrainian port during the war.

Ukraine has called for the grain deal to be extended to other products, such as metals, the Financial Times reported.

“This agreement is about logistics, about the movement of ships through the Black Sea,” Ukraine’s Deputy Economy Minister Taras Kachka told the newspaper.

“What is the difference between grain and iron ore?”

The Kremlin said a solution can only be found if it is linked to lifting restrictions on Russian metal producers.

Russia and Ukraine traditionally produce about a third of the world’s wheat.

But Russia said Friday it may not meet its projected crop of 130 million tons of grain due to weather conditions and a lack of spare parts for foreign-made equipment.

After five months of fighting, Ukrainian President Volodymyr Zelenskyy this week described the pressure his forces faced in the eastern Donbas region as “hell”.

Moscow is trying to control the largely Russian-speaking Donbas, comprising the provinces of Luhansk and Donetsk, where pro-Moscow separatists took control of the territory after the Kremlin annexed Crimea to the south in 2014.

Zelenskyy spoke of fierce fighting around the town of Avdiivka and the fortified village of Pisky, where Ukraine had recognized the “partial success” of its Russian enemy in recent days.

The Ukrainian army said on Thursday that Russian troops carried out at least two attacks on Pisky but were repulsed.

Ukraine had spent the past eight years strengthening defensive positions in Pisky, seeing it as a buffer zone against Russian-backed forces controlling the city of Donetsk about 10km to the southeast.

Ukrainian general Oleksiy Hromov told a news conference that his forces had recaptured two villages around the eastern city of Sloviansk, but had been driven back to the city of Avdiivka after being forced to leave a coal mine considered an important defensive position.

Reuters was unable to immediately verify the claims of either side.

On Friday, Ukraine’s general staff said Russian shelling on dozens of cities across the country had re-targeted civilian settlements and military infrastructure.

Read more about the Russian invasion of Ukraine:

Zelenskyy hit back, saying the group was trying to “shift responsibility from the aggressor to the victim.”

The White House said it expected Russian officials to try to frame Ukrainian troops for an attack on the frontline city of Olenivka last week that killed detainees held by Moscow-backed separatists.

UN Secretary-General Antonio Guterres said on Wednesday he would launch a fact-finding mission after both sides called for an investigation.

Mr Putin said he has launched his “special military operation” in Ukraine to ensure Russian security and protect Russian-speakers in Ukraine.

Ukraine and the West describe Russia’s actions as an imperial-style unprovoked war of aggression.

NATO Secretary General Jens Stoltenberg said on Thursday that the war is the most dangerous moment for Europe since World War II and that Russia must not win.

Amid fears by some politicians in the West that Russia’s ambitions would extend beyond Ukraine, Stoltenberg warned Putin that the reaction to such a move would be overwhelming.

“If President Putin even thinks of doing something similar to a NATO country as he has done to Georgia, Moldova or Ukraine, the whole of NATO will be immediately involved,” Stoltenberg said.

The war had previously prompted non-aligned Finland and Sweden to seek NATO membership, with the request so far ratified by 23 of the 30 member states, including the United States.