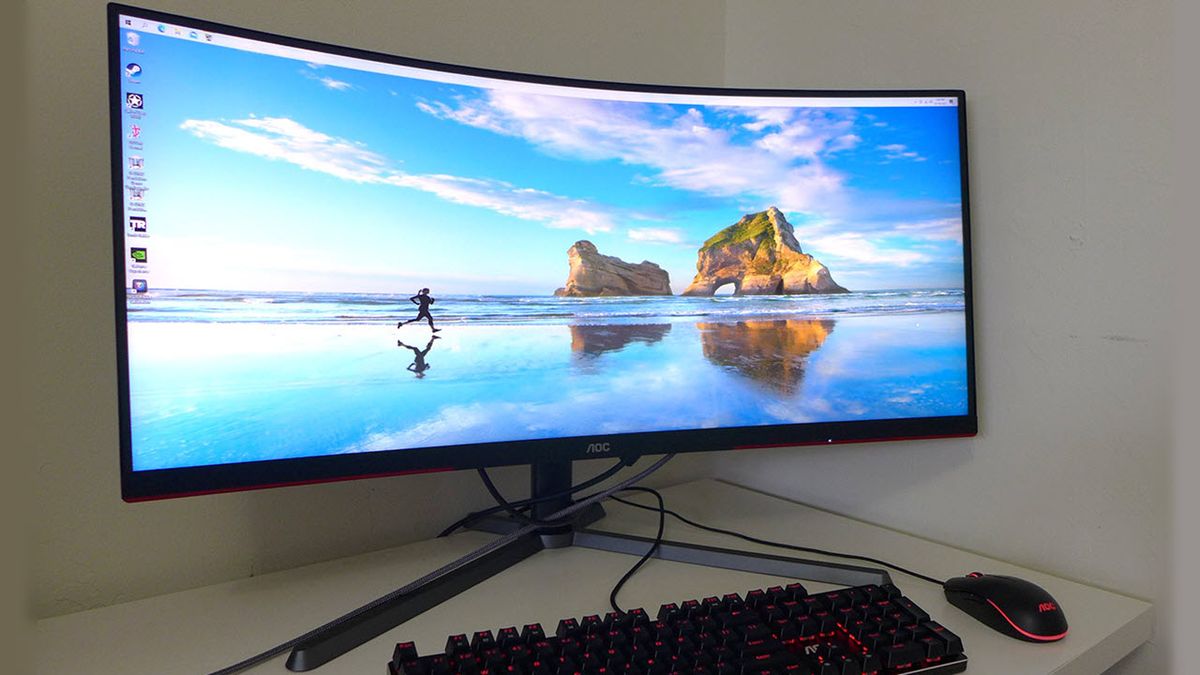 There are plenty of gently curved monitors available for people who don’t want an extremely enveloping effect. Since radii smaller than about 1300R can cause image distortion, that’s understandable. But for hardcore gamers looking to replicate VR goggles without hanging a ton of bulky tech on their heads, 1000R ultra-wide screens do a great job of filling one’s peripheral vision and surrounding the player with the virtual environment.

The AOC CU34G3S is such a monitor. It has a diagonal of 34 inches with a VA panel that delivers over 3,000:1 contrast. It has HDR and a wide color gamut for a punchy and realistic image. In addition, gaming performance is enhanced with Adaptive-Sync and a 165 Hz refresh rate. The best part is the price – just $430 right now – which makes it a great contender to join the ranks of the best gaming monitors.

With a high contrast VA panel, the CU34G3S brings plenty of dynamic range to the party. Although it doesn’t have a dimming function for HDR, it still has more image depth than any IPS panel. Vibrant colors are guaranteed by a wide color gamut that covers almost 87% of DCI-P3. And for purists, there’s a precise sRGB mode hidden in the color temperature options. The color is quite accurate and I didn’t find calibration necessary in either mode.

To keep games running smoothly, AOC includes both variants of Adaptive-Sync. AMD FreeSync is the native technology, operating in a range from 48 to 165 Hz. Nvidia G-Sync works fine, as confirmed by my tests, although the CU34G3S is not certified by Nvidia. For game aids, you get an aiming point, frame counter and a backlight strobe to reduce blur if you prefer that over Adaptive-Sync. Also included is an effective three-level overdrive.

AOC has omitted LED lighting, which does not detract from the functionality of the CU34G3S. There are internal speakers and a plethora of USB 3.2 ports, one upstream and four down, to support your peripherals. With a solid and adjustable stand completing the package, this seems like a good deal for users looking to curve their images to the max.

The CU34G3S comes well protected in a large box with its three parts surrounded by crumbly foam. After connecting the base and upright using a locking bolt, the panel clicks into place. Below the mounting point is a 100mm VESA mount that works with aftermarket arms and brackets. Bundled cables include HDMI and DisplayPort, but not USB. The power supply is internal, although unusual, the interface is IEC C5-6, often seen in power bricks. This is a first for me; I am more used to seeing IEC C13-14. No matter, with everything plugged in, the CU34G3S worked fine.

A thin recessed bezel surrounds the image with an eight millimeter border around the top and sides and 22mm across the bottom. A red border can be seen here and on the cable hole of the base. There’s more red on the back where they offset the stock and the small grilles on either side. The AOC logo is displayed on the front and back in silver. The base is also silver in color with a matte finish. It looks like solid metal, but is actually a plastic shell over a cast metal core.

The stand is a solid piece with a -5/22 degree tilt, 30 degree swivel and 130mm height adjustment. Movements are firm, but there is some wobbling where the panel attaches to the stand. The screen can vibrate a bit if you bang on your desk while gaming.

The side view shows how the bulge of the part is facing upwards, allowing easy access to the USB ports. They are on the side opposite the one in the photo above. The inputs are closer to the center and include two DisplayPort 1.4 and two HDMI 2.0. You also get a 3.5mm headphone jack. The control buttons are also visible here, a power key plus four controls for menu navigation. The internal speakers have a power of five watts and indeed play loud. Distortion is minimal, but there’s not much in the way of bass or lower mid frequencies. Players who want good sound should use headphones connected to the 3.5mm audio jack.

The CU34G3S has four buttons to navigate the OSD instead of a joystick. It’s a little old fashioned by today’s standards, but it gets the job done. The menu is AOC’s familiar ribbon-style graphic that appears at the bottom center of the screen.

The seven submenus start with Luminance, including brightness and contrast, plus gamma, dynamic contrast (SDR only), and the HDR modes. There are also eight picture modes, called Eco, aimed at specific tasks or game types. Default is the best place to be and is also the default mode. When combined with the game modes described below, switching Eco modes can be confusing. And it turns out there’s no point in adjusting the CU34G3S’s picture settings. There is no improvement to be found through calibration, but fortunately the standard image is quite accurate.

In Color Setup, you can choose from five presets, one of which is sRGB. This is the right choice if you prefer the right setting for SDR content. Other options use the monitor’s full native gamut, covering 87% of DCI-P3. The default option, Warm, is very accurate and cannot be improved upon.

Picture Boost is unique to AOC monitors. Allows the user to create a frame in the center of the screen that is brighter or dimmer than the surrounding image. Within the frame you can adjust brightness and contrast, along with size and position. Hidden away in the OSD settings menu is a DisplayPort version option and a pause reminder setting.

Ultra-wide displays are great for viewing multiple sources, and the CU34G3S lets you display two images at once. It’s picture-in-picture, so you can resize and reposition the secondary window.

In Game Setting, you can choose from multiple game modes that change the image and video processing parameters. They get confusing when combined with the Eco modes. I recommend leaving Game Mode off and setting the overdrive to your liking. Strong works fine with no ghosting, but I noticed a slight black trail behind moving objects in test patterns, a symptom of undershoot. You can enable a frame counter here and also set a backlight flash. It has 20 levels that reduce more blur as the image gets darker.

Set up and calibrate AOC CU34G3S

The CU34G3S is quite accurate out of the box in standard mode and warm color temperature with game mode turned off. Trying different settings, including the user’s color temperature, yielded no performance gains. It’s best to leave the monitor at its default settings and adjust the brightness to your liking. I’ve provided the settings for commonly used levels below. If you want the sRGB color gamut, there’s an option for SDR content under the color temperature settings. It takes that smaller gamut to near perfection.

In HDR mode, the default option is DisplayHDR closest to the mark. Other settings are Game, Picture and Movie. Those three add edge enhancement, which reduces image quality. Stick with DisplayHDR for the best picture with HDR content.

Gaming and hands on

If you’ve never used a curved monitor before, or if the one you’ve used is slightly curved, it’s wise to check out a 1000R ultra-wide screen before committing. This is the tightest curve currently available, and it is extreme. Thanks to that tight curve, spreadsheets and text documents get a cushion-shaped effect. It’s inevitable, but it shouldn’t be a problem. Once you get used to it, you hardly notice it unless you have flat screens nearby. And that’s another consideration. If you plan to have multiple monitors, they should all be the same curvature and size. Three CU34G3S make an excellent cockpit for driving and flight simulators. Two screens are ideal for first-person shooters.

Aside from the shape, the CU34G3S offers enough screen space for work. Putting windows side-by-side is natural as you’re essentially looking at two 27-inch QHD monitors. The pixel density is the same at 109 ppi, so the image has the same sharpness.

Color and contrast are pleasing, with true blacks and sharp demarcation of dark objects against light backgrounds. Black text on a white field appears cleanly with no visible fraying or anti-aliasing. Just avoid the extra HDR modes if you use HDR in Windows. Only DisplayHDR is shown without edge enhancement.

Gaming turned out to be an extreme pleasure. The CU34G3S has balanced performance with smooth motion and very low input lag. While it didn’t blow my tests away (it was a solid average in response and lag scores), it matched my playing rhythm with no noticeable lag and no loss of detail in fast-moving sequences. I always go straight to Doom Eternal Horde mode and in this case I ripped through the first few arenas in what seemed like record time. The extra peripheral information certainly helped, and having it closer to my eye was a plus.

Games where I had more time to explore the environment, such as Tomb Raider, further showed the value of a 21:9 screen. There’s no better way to game than with an ultrawide. The best 16:9 panel can’t match the extra width, and the tight curve of the AOC accentuates the effect.

If you’re prepared to put up with some image distortion during day-to-day tasks, it’s hard to beat the gameplay experience from a monitor like the CU34G3S.

LAKE: How we test PC monitors

LAKE: How to choose the best HDR monitor