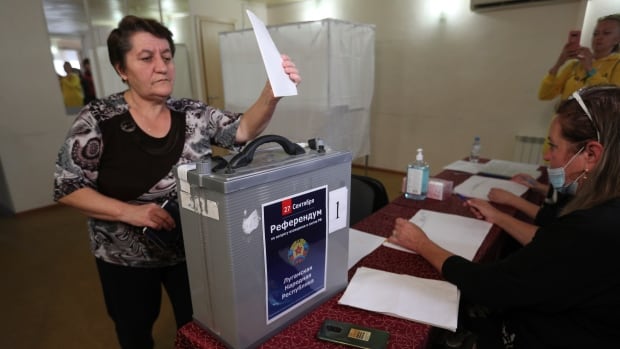 Voting began Friday in the Moscow-occupied regions of Ukraine on referendums to join Russia, Russia-backed officials there said.

The Kremlin-orchestrated referendums, widely condemned by Ukraine and the West as shams without any legal force, are seen as a step towards Russia’s annexation of the territories.

The votes will be held in the Luhansk, Kherson regions and the partly Russian-controlled regions of Zaporizhzhya and Donetsk.

The vote, asking residents if they want their regions to be part of Russia, is sure to move in the direction of Moscow. That would give Russia the pretext to claim that attempts by Ukrainian forces to regain control are attacks on Russia itself, dramatically escalating the seven-month war.

The vote will last five days through Tuesday.

The referendums are following Russian President Vladimir Putin’s orders for a partial mobilization, which could add about 300,000 Russian troops to the battle.

The mobilization of Russian troops begins with the rounding of men

Videos are emerging of what Russia’s massive troop mobilization looks like, with mostly men from poorer neighborhoods rounded up to fight in Ukraine. Within Russia, tensions and doubts are mounting and people are fleeing en masse.

As moods surged in the occupied territories, Russian social media sites were full of dramatic scenes of tearful families saying goodbye to men leaving military mobilization centers. In cities across the vast country, men hugged their crying relatives before leaving as part of the conscription.

Election officials will carry ballots to people’s homes during the first four days of the referendums and set up makeshift polling stations near residential buildings, according to Russian-installed officials in the occupied territories, citing security reasons. Tuesday is the only day voters are invited to come to the regular polls.

Polling stations have also been opened in Russia, where refugees from the occupied territories can vote.

Luhansk Governor Serhiy Haidai accused Russian officials of removing the names of people who voted against Russia’s membership. In online posts, Haidai also claimed that Russian officials threatened to kick down the doors of anyone who refused to vote, sharing photos of what appeared to be a few abandoned polling stations.

Yevgeny Popov, journalist and representative in the Russian State Duma, rejected characterizations that the process would be manipulated.

“The people of Donbas have been living under artillery shelling and the repression and threats from the Ukrainian government for the past eight years and I’m sure they’ve already decided what they want, and I know what they want,” Popov said.

Ukrainian President Volodymyr Zelenskyy only briefly mentioned the “mock referendum” in his overnight speech, in which he switched from speaking Ukrainian to Russian to directly tell Russian citizens that they are being “thrown to their deaths” by the planned mobilization.

In Geneva, a team of experts commissioned by the UN’s highest human rights body to investigate human rights violations in Ukraine said Friday that the first investigation has revealed evidence of war crimes committed in the country after Russia’s invasion nearly seven months ago.

The experts of the Commission of Inquiry into Ukraine, commissioned earlier this year by the Human Rights Council, have so far focused on four regions: Kiev, Chernihiv, Kharkiv and Sumy.

They presented their most comprehensive findings to date, citing testimonies of former detainees of beatings, electric shocks and forced nudity in Russian detention centers, and expressing serious concern about executions in the four regions.

“We were struck by the high number of executions in the areas we visited. The commission is currently investigating such deaths in 16 cities and settlements,” said Erik Mose, the commission’s chairman. He said his team had received and documented “credible allegations related to many more executions”.

President Putin calls up 300,000 reservists for Russian war in Ukraine

Ukraine’s ambassador to Canada, Yulia Kovaliv, is responding to news that Putin has mobilized 300,000 reservists to aid his military campaign in Ukraine — and his threat of nuclear retaliation.

Mose said an unspecified number of Russian soldiers committed crimes of sexual or gender-based violence, with victims ranging in age from four to 82.

Separately, Ukrainian officials say 436 bodies have been exhumed from a mass grave in the eastern city of Izium, 30 of them with visible signs of torture.

Kharkiv region governor Oleh Synyehubov and region police chief Volodymyr Timoshko told reporters in Izium on Friday that three more graves have been found in areas recaptured by Ukrainian forces this month in a counteroffensive.

Russian and Ukrainian forces exchange fire as both sides refuse to give up ground.

Ukraine’s presidential office said Friday that at least 10 civilians have been killed and 39 others injured by Russian shelling in nine Ukrainian regions in the past 24 hours.

It said fighting in the Russian-occupied south of Kherson has continued despite the vote, while Ukrainian forces have launched 280 attacks on Russian command posts, ammunition depots and weapons in the region.

Heavy fighting continued in the Donetsk region, where Russian attacks targeted Toretsk and Sloviansk, as well as several smaller towns. Russian shelling in Nikopol and Marhanets on the western bank of the Dnieper River has resulted in the deaths of two people and the wounding of nine in Marhanets.

Vitaliy Kim, governor of the Mykolaiv region of southern Ukraine, which borders the Kherson region, said there were explosions in the city of Mykolaiv in the early hours of Friday.

Pro-Russian officials in the Zaporizhzhya region reported a loud explosion in the center of Melitopol, a city Moscow captured early in the war. Official Vladimir Rogov gave no details about the cause of the explosion and whether there were any damage and casualties.

Moscow-backed authorities in the Donetsk region also accused Ukrainian troops of shelling the region’s capital Donetsk city and the nearby city of Yasynuvata.