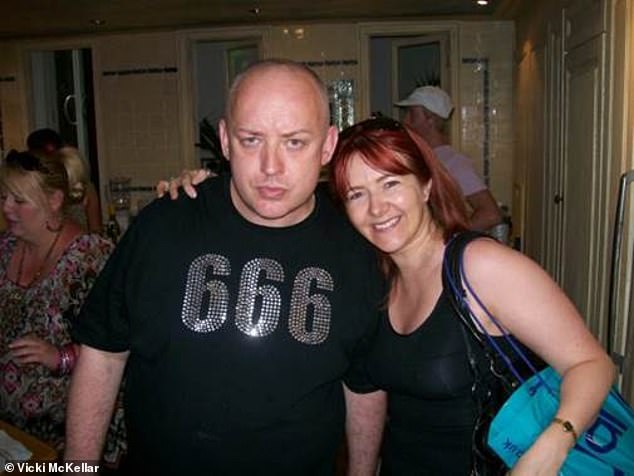 I’m A Celeb star Boy George looks barely recognizable in an unearthed photo taken shortly after he was released from prison 13 years ago.

The Culture Club icon, 61, was sentenced to 15 months in 2009 but was released after four months for good behavior and given six months of house arrest.

Boy George, real name. George O’Dowd was found to have handcuffed Norwegian model and male escort Audun Carlsen to a wall in January 2007.

He claimed he was high on cocaine and had a psychotic episode and is now clean and sober.

On the night the photo was taken, the singer had a bald head and no beard and was wearing one of his signature hats or his flamboyant make-up.

He has since had a hair transplant after being inspired by Wayne Rooney.

The new photo was shared by Vicki McKellar, who was George’s pen pal while in prison and wore a sparkly “666” T-shirt to a party to celebrate his release.

Vicki said, “He wore a devilish 666 T-shirt to make light of his prison ordeal.”

George had said his May 11 release date was a time to celebrate, so he hosted a soiree at his home in Hampstead, north London, which is now up for sale. 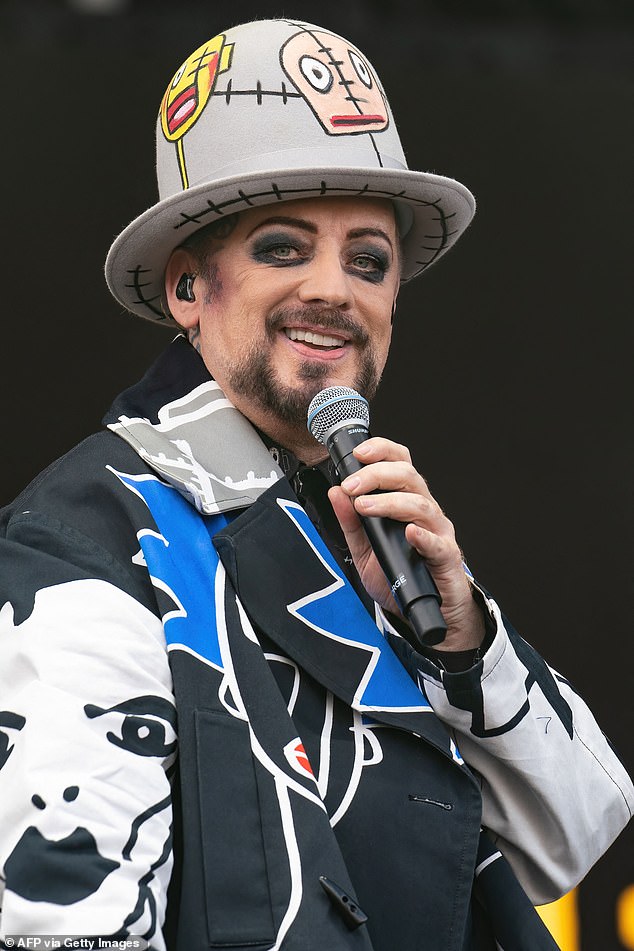 Done up: George as he usually looks, with his dramatic eyeshadow and signature hat

“George’s 48th birthday was just around the corner and he invited me along with his friends and family.

“I was buttering bread for the guests when he walked up to me and asked, ‘Why are you only buttering one side of the bread? We’re not in jail now’.”

She continued, “He had a tag on his ankle because although he was released from prison for good behavior, he still had to spend six months under house arrest.

“He wasn’t allowed to leave his house after his 7 p.m. curfew.”

Playwright Vicki said she and George danced in the kitchen and sang Buddhist songs, as well as his own record, Bow Down Mister featuring Jesus Loves You.

She said, “George stood right at the edge of his living room and asked, ‘Can I stand here?’ Will I get dragged back to jail if I move a toe?’ 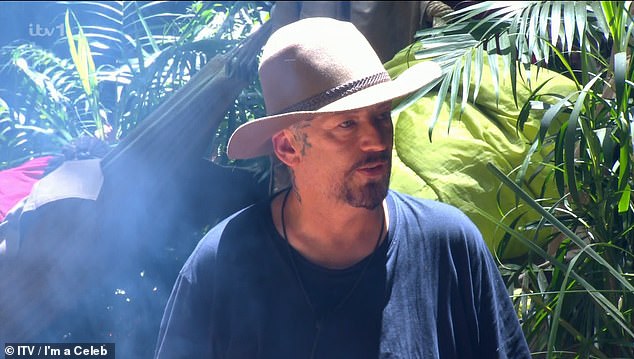 Vicki, from St. Albans, became George’s biggest fan after seeing him perform Do You Really Want to Hurt Me on Top of the Pops in September 1982.

She said, “I remember staring at the television screen, mesmerized. I fell in love, or as much as you can be in love at age six.”

“When Karma Chameleon hit number one a year later, I first met George.

‘It was at Brent Cross Shopping Center when the whole band signed their first book, When Cameras Go Crazy. George signed my book and I almost passed out when he kissed me.

“The next time I met George was outside the Red Bus recording studios. I pushed my way through the throng of fans and George told my mom she looked like Elizabeth Taylor! She was so delighted!’

Vicki was at Snaresbrook Court with his brother Kevin when the pop icon was convicted of assault and false imprisonment of male escort Audun Carlsen. 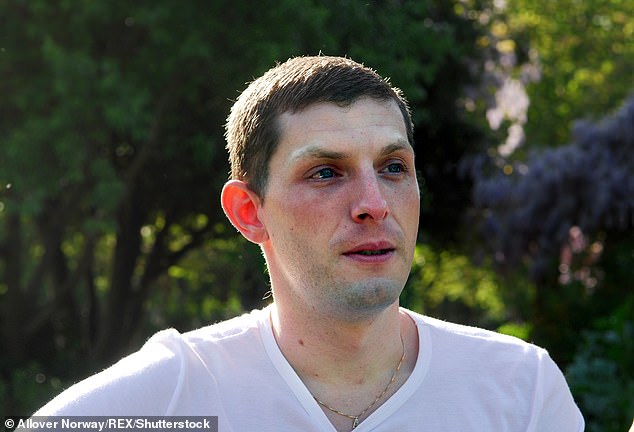 Assault: In December 2008 Boy George was convicted of the assault and false imprisonment of Norwegian male sex worker Audun Carlsen (pictured) during a ‘psychotic episode’

“It was such a shock when George was jailed,” Vicki said.

Vicki revealed how she wrote to George while he was serving his sentence at Pentonviille in London and Highpoint North Prison in Suffolk and he wrote back a touching letter thanking her for her loyal support.

She said, “I sent George a book called Only Love is Real: Soulmates Reunited by Doctor Brian Weiss. I knew George was spiritual and he would love it.

“George wrote me back right away and I cherish that letter to this day.” 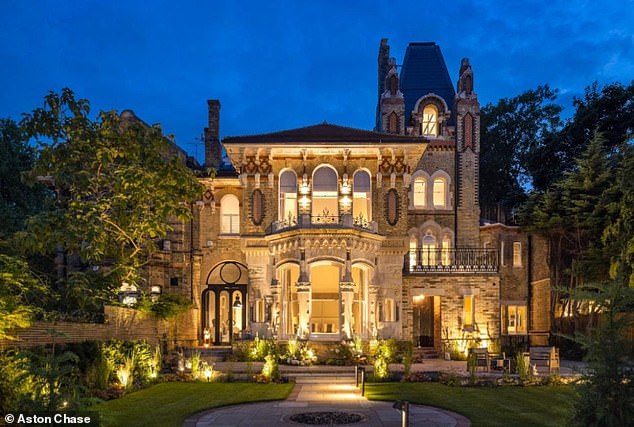 Vicki said: ‘George had said his May 11 release date was a time to celebrate, so he hosted a soiree at his home in Hampstead, north London, which is now up for sale (pictured) 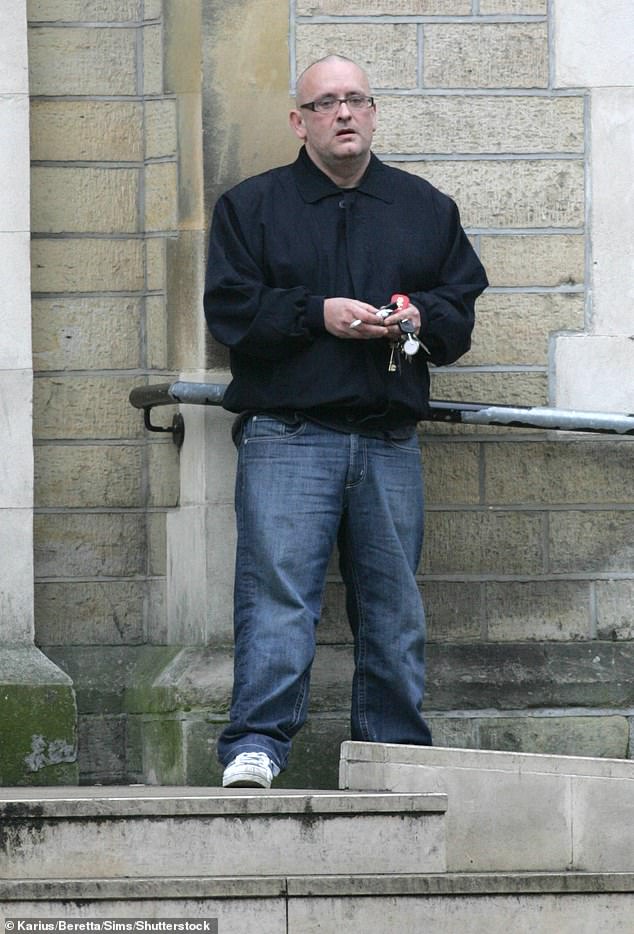 Family: George’s brother Kevin (pictured in 2009), dated Vicki while George was in prison and took her on a date to the singer’s house

In his letter, Boy George wrote: ‘Dear Vicki. I bless you for your sweet letter and support during this surreal chapter. Thanks also for the book, which I will add to my extensive library.

“It’s a perfect gift, because I’m reading a lot, prison offers the perfect opportunity. Trust that I am in a good mood and looking forward to the future.

God bless you and much love to you and all those you love. Cheers! G.’

Boy George and his brother, Kevin, invited Vicki to their mother Dinah’s house for Sunday Roast.

She said: ‘It was there that George played me a demo of a beautiful song called Lights, which he had written about his friend Paul Starr, who had sadly passed away from AIDS.

I’m A Celebrity 2022: everything you need to know about this year’s show

“I don’t think it was ever released, which is so sad because it really deserved to be a big hit.”

She said, “After the trial, George’s brother, Kevin, was devastated, as was I, that George was in prison.

“A friend of mine asked Kevin on Facebook and he accepted the request. He started messaging me and eventually asked me out.’

She said they went to George’s mansion in Hampstead, which is currently on the market for £17 million and that’s where Kevin confessed he had a crush on her.

Vicki said, “Then we kissed… very passionately! I had to put it there because there was no way I was going to let things continue in George’s house when he was in prison at the time.

“But Kevin and I ended up dating for a year before our relationship came to an end.”

Vicki is the co-creator of The Marilyn Conspiracy, a play that received rave reviews at the Edinburgh Fringe and will now be shown at a London theater next year.

She said, ‘No, my piece isn’t about him! But about Marilyn Monroe and the tragic last days of her life, and why I strongly believe she was murdered.

Now I pray that George will win I’m A Celebrity 2022 and be crowned king or queen! – of the Jungle.’

While Boy George sells his lavish home in Hampstead, Culture Club is still singing at the Church of the Poison Mind…or are they victims of their own success?

Having originally left the band in 1986, lead songwriter George enjoyed a successful solo career following the release of debut single Everything I Own the following year. To date, he has released 12 solo albums while also working as an established DJ.

Famous for his androgynous sense of style and heavy use of makeup, George did not discuss his sexuality publicly until 1995 when his autobiography Take It Like A Man was released, in which he affirmed that he was gay.

Moss, the band’s drummer and George’s secret lover during their early years, formed Heartbeat UK following the disbandment of Culture Club. He also played in the late ’80s acid house scene before releasing music in the 1990s with the bands Promised Land and Yeah.

He is a father of three with ex-wife Barbara Savage, who also owns a property near George in North London.

After the band split, bassist Craig tried to break through as a solo artist with the release of debut single in 1988. In 1988 he released a solo single I’m A Believer. However, the song failed to impact the UK top 40 and would be his only release outside of Culture Club.

Throughout the 1990s, Craig launched his own dance label, SLAMM Records, and served as an executive producer for Mr. & Mrs. Smith and Mankey.

He also performed with Kid Creole and the Coconuts.

After leaving Culture Club Hay formed This Way Up to moderate success, releasing singles Tell Me Why, If I Can’t Have You and Louise in 1987. Debut album Feeling Good About It was released the same year.

In 1989 he moved to Los Angeles and began writing and developing music for emerging artists before turning to composition work.

To date, he has worked with the legendary Hans Zimmerman and is responsible for scoring music for TV shows Cracker and The Dead Zone. 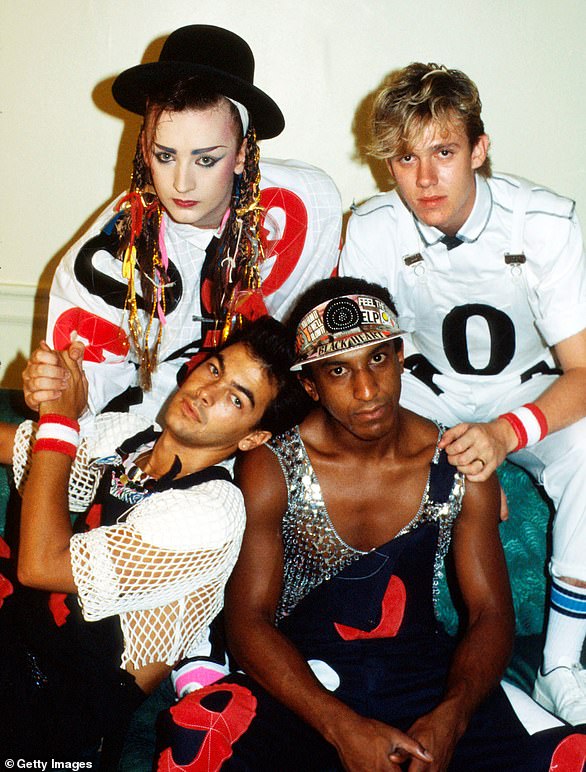