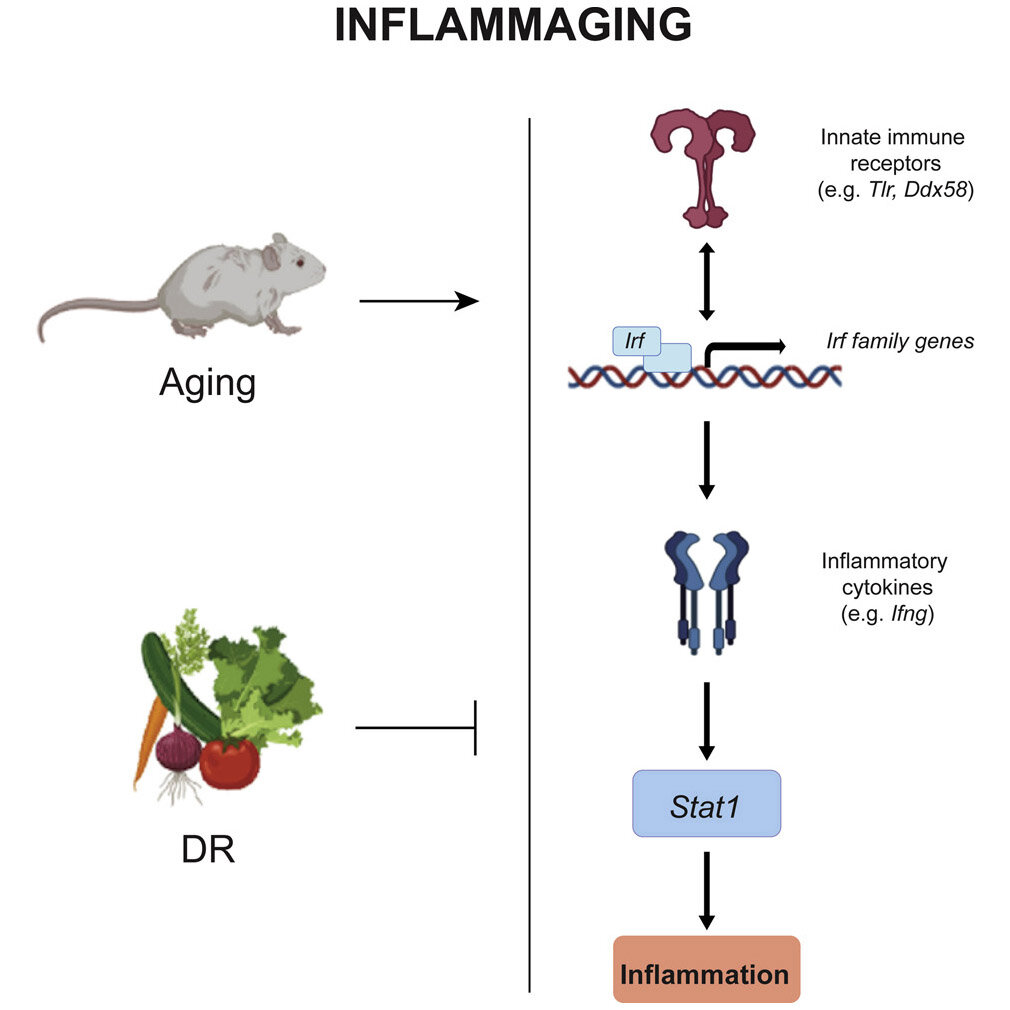 Mild, persistent inflammation in tissue is considered to be one of the biological hallmarks of the aging process in humans – and at the same time is a risk factor for diseases such as Alzheimer’s disease or cancer. Prof. dr. Francesco Neri and Dr. Mahdi Rasa of the Leibniz Institute on Aging-Fritz Lipmann Institute (FLI) in Jena have succeeded for the first time in describing at the molecular level the regulatory network that controls the general inflammatory response of multiple organs. In addition, they were able to show that dietary restriction can affect this regulatory circuit, thereby inhibiting inflammation.

This underlying inflammation has health implications. “Having constant activation of immune cells can lead to their depletion, which in turn leads to problems if you have an infection. Immune cells may stop responding properly. Inflammation is also related to the development of cancer – because in inflamed tissue we see increased cell proliferation,” explains Prof. Francesco Neri, who headed the “Epigenetics of Aging” research group at the Leibniz Institute on Aging-Fritz Lipmann Institute (FLI) in Jena until the end of 2021. The biologist now teaches and conducts research at the University of Turin, Italy.

How do aging, inflammation and nutrition interact?

Together with Dr. Mahdi Rasa and other colleagues at the FLI, Prof. Neri conducted a study in mice to investigate how the chronic inflammation associated with aging is regulated and maintained by genes — and whether dietary restrictions can affect this regulatory network and inhibit inflammation. . Indeed, studies over the past two decades have shown that various animals — from flies to worms to rodents to monkeys — live longer when fed a diet that reduces calorie intake.

For example, when mice were fed 30% less food, they were fitter, more active and lived three to four months longer — the equivalent of a 10% to 15% increase in lifespan. Improved health has also been observed in people on calorie-restricted diets. It is also known that inflammatory reactions can be reduced by this nutritional approach. However, the ways inflammation, aging and dietary restrictions are regulated in detail at the molecular level and how they relate to each other are not yet understood.

For their current study, recently published in the journal Mobile Reports, the FLI researchers first compared four-month-old mice with older mice (22 months). Contrary to previous studies, the activity of the genes was measured not only in one organ, but in several parallel tissues: blood, brain, heart, kidney, liver, lung, muscle and skin.

“The priority was to study the pathways affected in all tissues to understand inflammation at the systemic level,” explains Neri. “What we found is that the inflammatory stage in older mice was characterized by the upregulation of a specific set of genes that encode receptors of the innate immune system. This upregulation leads to the activation of a set of interferon-regulating genes. And these genes then activate others.” “genes that produce inflammatory cytokines, as well as activate Stat1, which is a master transcription factor for the regulation of genes associated with inflammation. This whole process is like a positive feedback loop that maintains the inflammatory state.” The Jena researchers are thus the first to describe the organ-transcending and thus systemic regulatory network. But can this cycle be interrupted by reduced calorie intake?

To answer this question, Neri and Rasa studied the gene activity in the organs of two additional groups of rodents: mice that were fed 30% less food for almost their entire lives (4 to 22 months), and mice that were fed only two months at the end of the study. their life. Whether the caloric restrictions were short-term or long-term, in general the diet had a positive effect on all organs studied, with the exception of the heart.

With their work, the two researchers also provide clues for future drug therapies for aging-related chronic inflammation. “Within this regulatory network that we describe, a well-studied and important component is, for example, TLR4, a gene that codes for a receptor of the innate immune system,” explains Dr. Rasa, who conducted the gene analyzes as part of his PhD research. .D. rack. “The receptor acts as an SOS signal that we don’t need if there are no pathogens to fight off. If we could downregulate TLR4, we could reduce the chronic inflammatory response to aging.”

Another much-discussed intervention option is the administration of nutritional supplements such as vitamins or probiotics with the aim of influencing the composition of microorganisms in the digestive tract. “Dietary restriction appears to alter the microbiome, leading to less inflammation. If it is possible to alter the gut flora of the microbiome through dietary supplements, the same beneficial effects can be achieved without the need for a restricted diet.” This is still just speculation, admits Prof. Neri. “We need a better understanding of the processes involved first.”

This document is copyrighted. Other than fair dealing for personal study or research, nothing may be reproduced without written permission. The content is provided for informational purposes only.