In the oceanwhere light only penetrates a few hundred meters underwater, animals depend on sound to find food, navigate and communicate with each other.

But even well into the last century, people were not aware of the soundscape beneath the waves.

Because they couldn’t hear the low frequencies that travel farthest underwater, explorers and scientists believed the ocean was a “quiet world,” according to French bioacoustics expert Michel André.

“We (humans) ignored this acoustic dimension,” he says.

“We’ve been polluting the ocean with sound, without even having the first idea that it could have damaged it.”

In recent decades, the depths of the ocean have become noisier, with the rumble of ship engines, the intense pings of military sonar, and seismic blasts used to locate oil and gas deposits.

This cacophony of man-made sound drowns out the natural chatter of marine life and the impact is life-threatening. 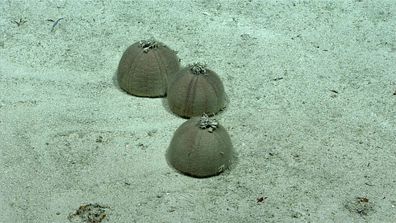 Mammals such as whales have become isolated from their mates, their migratory routes have been disrupted and in some cases noise pollution has caused permanent hearing loss, which can be fatal.

“Sound is life in the ocean,” says André.

“If we pollute this communication channel… we are condemning the ocean to irreversible change.”

André and other scientists believe that increased noise pollution has led to more collisions between ships and whales, as the ocean giants — which use echolocation or biological sonar to “see” objects — can struggle to locate a ship above the constant noise, while some individuals have become so deaf that they cannot hear the approaching danger.

Since 2007, the International Whaling Commission has recorded at least 1,200 collisions between ships and whales worldwide, but many more have likely gone undetected.

Technology that uses acoustics to detect the presence of whales in shipping lanes could help prevent these collisions.

André and his team at the Laboratory of Applied Bioacoustics in Barcelona have developed software called Listen to the Deep Ocean Environment (LIDO), which monitors acoustic sources in real time and uses artificial intelligence to identify them.

In October, a two-meter buoy equipped with this technology and other sensors will be dropped in the Gulf of Corcovado, off the coast of Chile, an area crowded with both whales and ships.

Using LIDO, it can detect whales within a radius of at least 10 kilometers and automatically send an alert to Chile’s Navy, which in turn sends a message to nearby ships, encouraging them to change course or reduce their speed. .

Marine engines make less noise at lower speeds, making it easier for whales to settle in their location.

The buoy will be the first of a wider network deployed as part of the Blue Boat Initiative, a program established in 2020 by MERI Foundation, a scientific research organization based in Chile.

The long-term goal is to run these types of buoys along the coast of South America and beyond, providing safe passage for migrating whales and other marine species, said Sonia Español-Jiménez, executive director of MERI.

The Gulf of Corcovado was an obvious place to start.

Stretching more than 50 kilometers between Chiloé Island and mainland southern Chile, the waters are a hotspot for whales — home to nine species — and the largest breeding ground in the Southern Hemisphere for the endangered blue whale.

But the area is also subject to intensive sea traffic, with many ships belonging to the salmon farming industry. However, research in the US has shown that reducing ship speed is a simple and cost-effective method of avoiding collisions with whales.

In May 2021, after a series of deadly collisions on the Chilean coastline, more than 60 Chilean scientists made a plea to the government to divert ships from sensitive regions, set speed limits in certain shipping lanes and set up an alert system to warn ship pilots. warn.

Susannah Buchan, an associate researcher at the University of Concepción in Chile, was one of the signatories and is currently working with Woods Hole Oceanographic Institution (WHOI) on adapting a similar acoustic warning system for Chilean waters.

While she sees “great potential in acoustic warning systems,” Buchan says it’s important that they be fully validated in scientific literature and through a peer-review process.

She also warns that acoustic warning systems are not a “silver bullet” that will end all ship attacks and must be supplemented with other solutions such as delay zones.

The acoustic buoys deployed as part of the Blue Boat Initiative will not only act as an early warning system for ships, but will also use sensors to collect data such as water temperature, pH and oxygen levels, which can be used to monitor ocean health. and the impact of climate change.

They can also be used to monitor local whale populations.

“Each whale has a unique sound,” Español-Jiménez explains, and the buoy’s LIDO technology can identify and classify four of the whale species found in the Gulf of Corcovado based on their song: humpback whales, blue whales, right whales and sei whales.

She adds that as the buoys collect more data, LIDO can be trained to identify other marine species.

Together, all of this data can be used to inform government policies and actions on marine conservation and climate change, she says.

Technology is changing our understanding of the ocean, André says.

“It has brought back this ability to hear underwater and listen to creatures underwater and understand that they need to survive in this environment.”

As a pioneer in bioacoustics, André’s work began in the 1990s, when he began investigating the cause of ship-whale collisions on a busy ferry route in the Canary Islands. 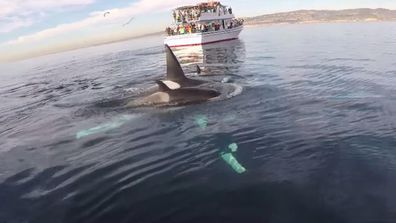 His research found that exposure of whales to sound led to “acoustic trauma,” severely damaging their inner ear receptors over time.

It was then that he got the idea to create an acoustic anti-collision system for whales, but the Blue Boat Initiative marks the first time its technology is being implemented in the real world.

André would like to see it become more widespread, crossing countries and continents.

“I hope we can repeat this effort along the Pacific coast so that we can trace the tracks of these whales as far as Alaska,” he says.

By providing tools to identify sources of sound and monitor biodiversity, André believes that people can reconnect with nature and help restore it: “If we find a way to observe, listen and understand the message of sound, then we have a way of understanding the health of the Earth.”