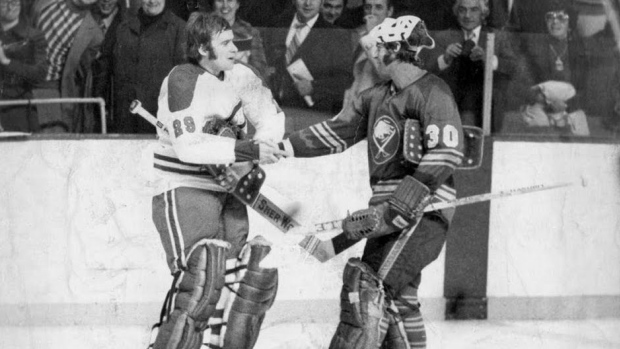 On March 20, 1971 at the Montreal Forum, Dave—then with the visiting Sabers—and Ken became the first siblings to face each other in goal in an NHL game.

“The National Hockey League mourns the recent passing of former goalkeeper, innovator, educator and philanthropist Dave Dryden,” NHL Commissioner Gary Bettman said in a statement. “Respected and loved by all who were fortunate enough to know him, Dryden has contributed to our game after his 14 seasons as a pro in the NHL and WHA — including a memorable game when he and brother, Ken, became the first siblings. were to play against each other in the NHL.

“In the mid-1970s, he reinvented the goalkeeper mask and designed the combination of a fiberglass helmet and a birdcage front that significantly increased protection, transformed the way the position could be played and continues today. After retiring, he worked with the League on equipment refinement, always focusing on better protecting athletes. He also had a long career after playing as principal of an elementary school and running the bed-making charity Sleeping Children Around the World that his parents had founded.

“We extend our deepest condolences to Dave’s wife, Sandra, their two children and six grandchildren, and all whose lives and careers have been enhanced by his work. And in his name, the NHL will make a donation to Sleeping Children Around the World.”