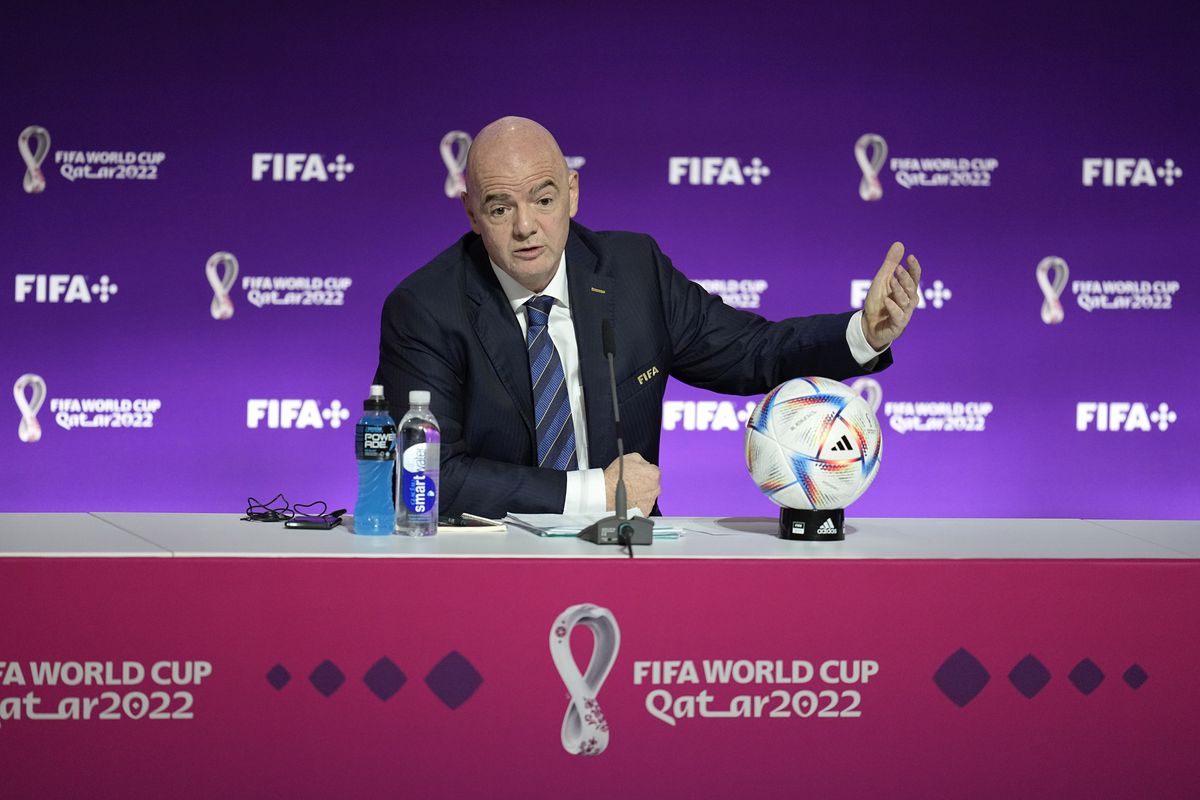 The FIFA president ran an hour-long rant on the eve of the opening World Cup match, then spent about 45 minutes answering media questions about the actions of the Qatari government and a wide range of other topics.

What is Qatar’s ultimate goal?

Opinion: Who is to blame for the 2022 World Cup? David Beckham

Infantino later fired back at a reporter who noticed he had left women out of his unusual statement.

“I feel like a woman,” the FIFA president replied.

Qatar has faced a lot of criticism since 2010, when it was chosen by FIFA to host the biggest football tournament in the world.

Migrant workers building Qatar’s World Cup stadiums often worked long hours in harsh conditions and were subjected to discrimination, wage theft and other abuses as their employers evaded responsibility, London-based rights group Equidem said in a 75-page report. which was published this month.

Infantino defended the country’s immigration policy and praised the government for bringing migrants in to work.

“We in Europe are closing our borders and we are practically not allowing any worker from those countries, who are clearly earning very low incomes, to work legally in our countries,” Infantino said. “If Europe really cared about the fate of these people, these young people, then Europe could also do as Qatar did.

Qatar is ruled by a hereditary emir who has absolute authority over all government decisions and follows an ultra-conservative form of Islam known as Wahhabism. In recent years, Qatar has been transformed after a natural gas boom in the 1990s, but it has been under pressure from within to stay true to its Islamic heritage and Bedouin roots.

Under heavy international scrutiny, Qatar has implemented a number of labor reforms in recent years that have been praised by Equidem and other rights groups. But advocates say abuse is still widespread and workers have few options for redress.

However, Infantino continued to attack the Qatari government to redirect criticism towards the West.

“What we Europeans have done for the past 3,000 years, we have to excuse for the next 3,000 years before we start teaching people moral lessons,” said Infantino, who moved from Switzerland last year to live in Doha ahead of the World Cup.

Responding to his comments, human rights group Amnesty International said Infantino “dismisses legitimate criticism of human rights” by decrying the price paid by migrant workers to make the tournament possible and FIFA’s responsibility for it.

“Demands for equality, dignity and compensation cannot be treated as some kind of culture war – they are universal human rights that FIFA has pledged to respect in its own statutes,” said Steve Cockburn, Amnesty’s chief economic and social justice.

A televised address by the Emir of Qatar, Sheikh Tamim bin Hamad Al Thani, on October 25 marked a turning point in the country’s approach to criticism. He claimed it was “subjected to an unprecedented campaign that no host country has ever faced”.

Since then, government ministers and senior World Cup organizers have dismissed some European criticism as racism, calling for a compensation fund to be created for the families of migrant workers as a publicity stunt.

Qatar has often been criticized for laws that criminalize homosexuality, limit some of women’s freedoms and do not offer citizenship to migrants.

“How many gays have been persecuted in Europe?” Infantino echoed earlier comments that European countries had similar laws until recent generations. ‘Sorry, it was a process. We seem to forget.”

He recalled that in a certain region of Switzerland, women were not given the right to vote until the 1990s.

He also chided European and North American countries for not opening their borders to welcome soccer-playing girls and women who helped FIFA and Qatar leave Afghanistan last year.

Albania was the only country to act, he said.

Seven of the 13 European teams at the World Cup said their captains will wear an anti-discrimination armband in matches that violate a FIFA rule as they take part in a Dutch campaign dubbed “One Love”.

FIFA has declined to comment publicly on the matter, or on the European football federations’ insistence on FIFA to support a compensation fund for the families of migrant workers.

The ripostes came on Saturday.

FIFA now has its own armband designs, with more common slogans, in collaboration with various UN agencies. The bracelets for the group games read: ‘FootballUnitesTheWorld’, ‘SaveThePlanet’, ‘ProtectChildren’ and ‘ShareTheMeal’.

At quarterfinals, “NoDiscrimination” is used.

Not good enough, the German Football Federation said a few hours later, deciding to stick with the heart-shaped, multicolored “One Love” bracelet logo.

FIFA also wants to create a legacy fund from its earnings linked to this year’s World Cup – and will let its critics, or anyone who wants to, contribute.

“And those who invest a certain amount will be part of a board that can decide where the money goes,” Infantino said.

Legacy funds from previous World Cups went directly to football in the host country – $100 million from FIFA to South Africa in 2010 and Brazil in 2014. Some money was spent on new vehicles for officials and even more obscure projects.

Two priorities this time for global projects are education and a labor excellence hub in partnership with the United Nations-backed International Labor Organization.

According to British media reports this week, fans wearing England shirts and cheering outside the team hotel were people from India living and working in Qatar.

It followed reports of Qatar’s project to pay expenses for around 1,500 fans from the 31 visiting teams to travel to the World Cup, sing at the opening ceremony on Sunday and stay to post positive social media content about the host country .

It fueled a long-standing narrative that Qatar pays people to be sports fans.

“Do you know what this is? This is racism. This is pure racism,” Infantino said of the criticism of the English cheerleaders. “Everyone in the world had the right to cheer for whomever he wants.”

Infantino spoke knowing he will be re-elected unopposed as FIFA president in March.

“Unfortunately for some of you,” he told reporters on Saturday, “it looks like I’ll be here for another four years.”