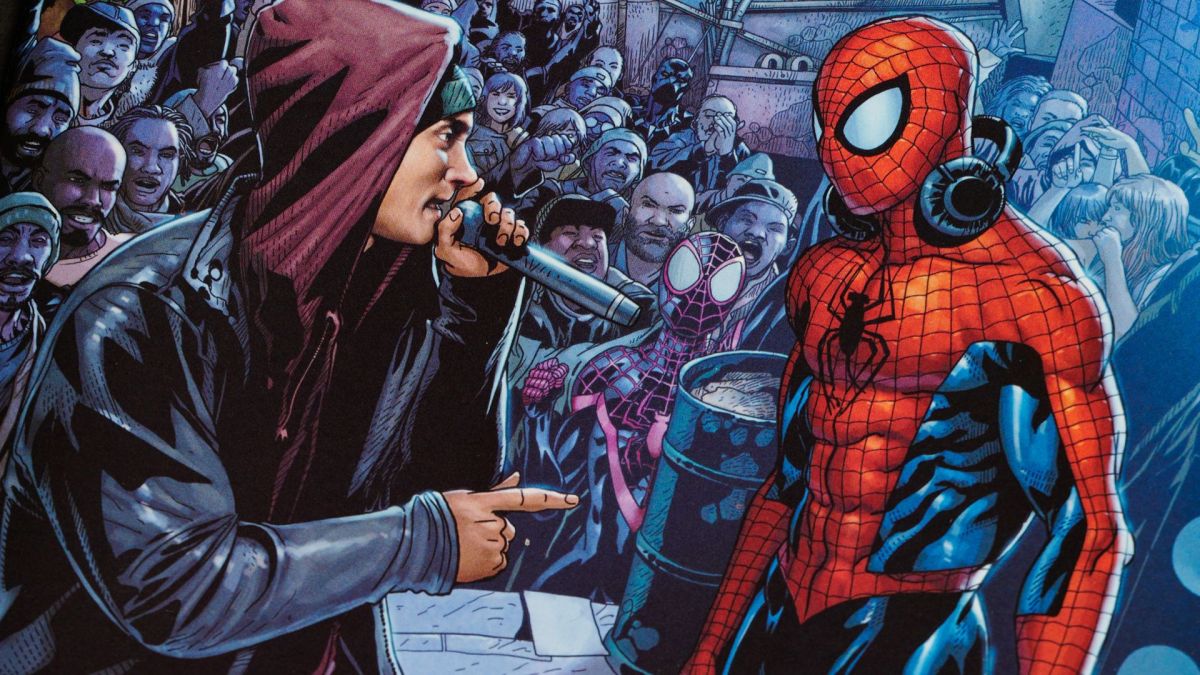 Hip-hop superstar and recent Rock & Roll Hall of Fame inductee Eminem returns to Marvel Comics for an Amazing Spider-Man #1 variant cover that pits Eminem against Spider-Man himself in an image that pays homage to the climactic rap fight scene from Eminem’s 2002 biographical film 8 Mile, featuring Marvel characters like Miles Morales, Ghost-Spider, Daredevil, and Luke Cage in the audience.

“HONORED to be a part of the Official Variant of The Amazing Spider-Man (2022),” tweeted the official Eminem Twitter account (opens in new tab) on November 21, along with the announcement that the variant will go on sale Tuesday, November 22 via Eminem’s website.

The new variant is for Amazing Spider-Man #1 (Legacy #895) which was released in April and is illustrated by Salvador Larroca and Edgar Delgado.

Eminem is the second hip-hop legend to appear on a Marvel Comics cover this month. Christopher “Notorious BIG” Wallace appeared on a variant of Deadpool #1 co-created with Hustl., who also collaborated with Marvel on the Eminem cover.

5,000 printed copies are available for purchase at TheHaul.com (opens in new tab) and an additional limited edition of 1,000 of the spotlight version of the comic book cover variant will go on sale on Tuesday, November 29.

“I’ve always been a huge Spider-Man fan since I was a kid,” Eminem says in Marvel’s official announcement. “He’s definitely in my top 5… So being on a cover fighting Spider-Man is so exciting and an honor.”

Strangely enough, Eminem is no stranger to Marvel Comics.

Way back in 2009, he co-starred with Frank Castle in Eminem/Punisher #1, in which Punisher teams up with Eminem to take on terrorists who interrupt one of his concerts. That comic was also drawn by Salvador Larroca. Additionally, Eminem provided theme songs for Sony’s 2018 Venom movie and its 2021 sequel Let There Be Carnage.

Stay on top of everything new Spider-Man comics Marvel is scheduled for release in 2022 and 2023.