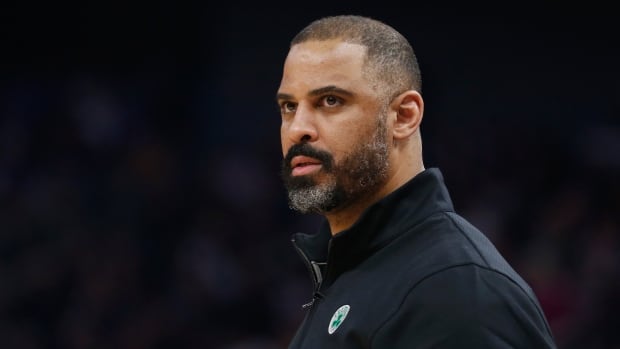 The Boston Celtics plan to punish coach Ime Udoka, likely with a suspension, for an inappropriate relationship with a member of the organization, two people with knowledge of the matter told The Associated Press on Thursday.

The people spoke to the AP on condition of anonymity because the reigning Eastern Conference champions have not made any details public. The exact penalty, including the length of the possible suspension, has not been determined.

One of the people who spoke to the AP said the Celtics have decided that assistant coach Joe Mazzulla will temporarily take over the team if Udoka is suspended.

CBC Sports has not independently confirmed the reports.

ESPN first reported Wednesday night that a suspension was being considered for violating team policy. ESPN and The Athletic later reported that the Celtics’ investigation centers on whether Udoka had an inappropriate relationship with a member of the organization.

Losing Udoka would be a major blow to a team widely regarded as one of the favorites to compete for an NBA title this season, having fallen just two games less than winning the title last season in its debut year. championship.

The Celtics open training camp on Tuesday. If Udoka is not allowed to lead the team, the job will almost certainly fall to one of his assistants. One possible candidate, Joe Mazzulla, interviewed this summer for the Utah Jazz coaching job, a position that eventually went to Will Hardy — who was Udoka’s assistant in Boston last season.

Udoka had a brilliant first season as the Celtics coach, finishing the regular season 51-31 – 26-6 in the last 32 games – and leading Boston past Brooklyn, Milwaukee and Miami to the NBA Finals. The Celtics lost the title series in six games to the Golden State Warriors.

It is the second major disciplinary situation in as many weeks in the NBA, following Commissioner Adam Silver’s decision last week to suspend Robert Sarver – the owner of the Phoenix Suns and WNBA’s Phoenix Mercury – for a year and fine him. $10 million after an investigation revealed his pattern of disturbing behavior in the workplace, including abusive and racist language. Sarver said on Wednesday that he plans to sell his teams.