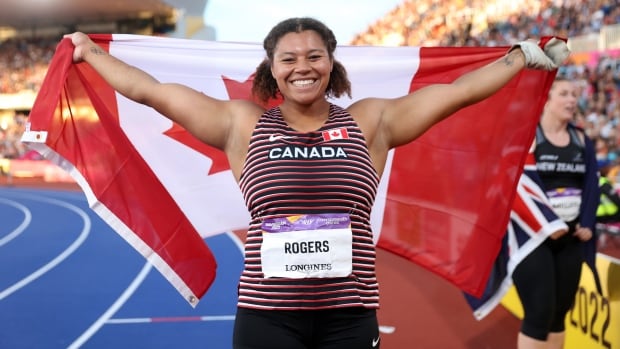 Canadian hammer thrower Camryn Rogers topped the podium on Saturday in the women’s final for the country’s 22nd gold medal at the Commonwealth Games in Birmingham, England.

The 23-year-old from Richmond, BC, launched her third throw of 74.08 meters to win the event at Alexander Stadium.

Rogers reached the final on Thursday and set a new Games record with a throw of 74.68 m to lead the qualifying round.

Canada has also won 29 silver and 33 bronze medals for a total of 84 medals over nine days of competition, placing them currently third in the standings.

The 29-year-old from Coquitlam, BC, took a 4-2 point victory over Nigeria’s Hannah Rueben in the gold medal match at the Coventry Arena.

Di Stasio, who also won a world title in 2018, advanced to the final after two dominant victories earlier in the day. She defeated Australia’s Naomi de Bruine 10-0 in the quarter-finals and defeated India’s Pooja Sihag 6-0 in the semi-finals.

The native of Coquitlam, BC defeated Nigerian Hannah Rueben 4-2 to take the gold.

The 24-year-old secured his place in the gold medal match with a 7-0 victory over Pakistani Tayab Raza in the semi-final. Randhawa won a thrilling match against India’s Deepak Nehra in the quarterfinals earlier on Saturday, finishing in the top 8-6.

WATCH l Randhawa at the top of the podium:

The wrestler from Abbotsford, BC defeated Nicholas De Lange of South Africa 9-3 to earn Canada another wrestling medal.

Carmel Kallemaa led the way with three medals. The 24-year-old from Toronto won silver in the club event and bronze in both the ribbon and ring.

Kallemaa started the day with 28,200 points in the ring and finished third behind Anna Sokolova of Cyprus (28,300) and Gemma Frizelle of Wales (28,700), who made history as the first Welsh gymnast to win hoop gold at the Commonwealth Games.

Kallemaa went on to earn 29,100 points in clubs, leading all competitors with an execution score of 8,200.

Kallemaa also helped Canada to gold in the team final on Thursday.

The Toronto native won her 3rd medal of the day at the Games, racking up 27,500 points to take the bronze in the rhythmic gymnastics ribbon final.

Suzanna Shahbazian of Montreal claimed silver in the ball event with 29,050 points for her second medal of the Games.

Joe Ee won another gold medal with 29,700 points, while Sokolova rounded out the podium with 28,800 points.

The 20-year-old from Nanaimo, BC, set a new personal best with a throw of 76.36 meters in his fifth of six attempts.

The Nanaimo, BC native would throw 76.36 meters to set a new personal best, earning him a silver medal.

The Canadians collected 297.00 points during five dives at the Sandwell Aquatics Center in Birmingham.

The Canadian duo finished with a final score of 297.00, finishing 3rd in the synchronized final of the women’s three-meter springboard.

Australian Maddison Keeney and Anabelle Smith won all five rounds and topped the podium with 316.53 points.

Ng Yan Yee and Nur Dhabitah of Malaysia knocked the Canadians out of silver with a strong final dive – 2½ somersaults ahead 1 turn – earning 67.50 points for a total of 299.85.

It is Vallée’s second medal at these Games, after also winning gold in the women’s one meter springboard on Friday.

Samantha Stewart claimed silver in the women’s 53kg Nordic tournament with a 6-5 point win over Nigerian Mercy Adekuoroye. In the Scandinavian format, wrestlers compete in a round-robin to determine the top three wrestlers.

The 32-year-old from Fredericton, NB dropped her opening match of the day as she was pinned down by India’s Vinesh Phogat, who won gold. But she bounced back with a dominating 12-2 win over Sri Lanka’s Chamodya Keshani Maduravalage Don.

Madison Parks of Komoka, Ontario took the gold medal in the women’s 50 kg division, but was pinned in the final by Nigerian Mercy Genesis, leaving her with a silver medal.

The Komoka, Ont. native fell in the final of the competition for Nigerian Mercy Genesis and earned a silver medal.

Jasmit Phulka of Abbotsford, BC, added Canada’s fourth wrestling medal of the day in the men’s 74kg division with an impressive 11-1 win over New Zealand’s Cole Hawkins in the bronze medal match.

The contestant from Abbotsford, BC defeated New Zealand’s Cole Hawkins 11-1 to take the bronze.

The Winnipeg native started the competition by winning 4-1 on points against Kenya’s Christine Ongare, who won bronze at the 2018 Commonwealth Games in Australia. But Dhillon lost her semifinal match to Indian Nitu Ghanghas after the referee halted the match in the third round.

Bronze medals are automatically awarded to the losers of the semifinals.

Dhillon also took bronze at the 2022 AMBC Continental Championships in March, where she represented Canada for the first time.

The Winnipeg native fell for Nitu Ghanghas of India after the referee stopped the match in the 3rd round.

Canadian Olympian Wyatt Sanford was also awarded a bronze medal in the men’s 63.5kg division after losing on points to Scottish Reese Lynch in the semi-final.

The 23-year-old from Kennetcook, NS advanced to the medal fight after three straight wins.

Sanford opened the competition with a win over Niue’s De Niro Pao, and he followed it up with points decisions over Lesotho’s Qhobosheane Mohlerepe in the round of 16 and Uganda’s Joshua Tukamuhebwa in the quarter-finals.

The 23-year-old from Kennetcook, NS was short in the 63.5 kilogram division against the Scottish Reese Lynch.

Keoma-Ali Al-Ahmadieh took home Canada’s third bronze boxing medal of the day in the men’s 57kg. He was unable to participate in the semi-finals due to an injury, which meant that Ireland’s Jude Gallagher went to the semi-finals by walkover.

The Montreal native was strong after points wins over Australian Charlie Senior in the round of 16 and Guyanese Olympian Keevin Allicock in the quarter-finals.

For more stories about the experiences of black Canadians – from anti-black racism to success stories within the black community – visit Being Black in Canada, a CBC project that Black Canadians can be proud of. Read more stories here.