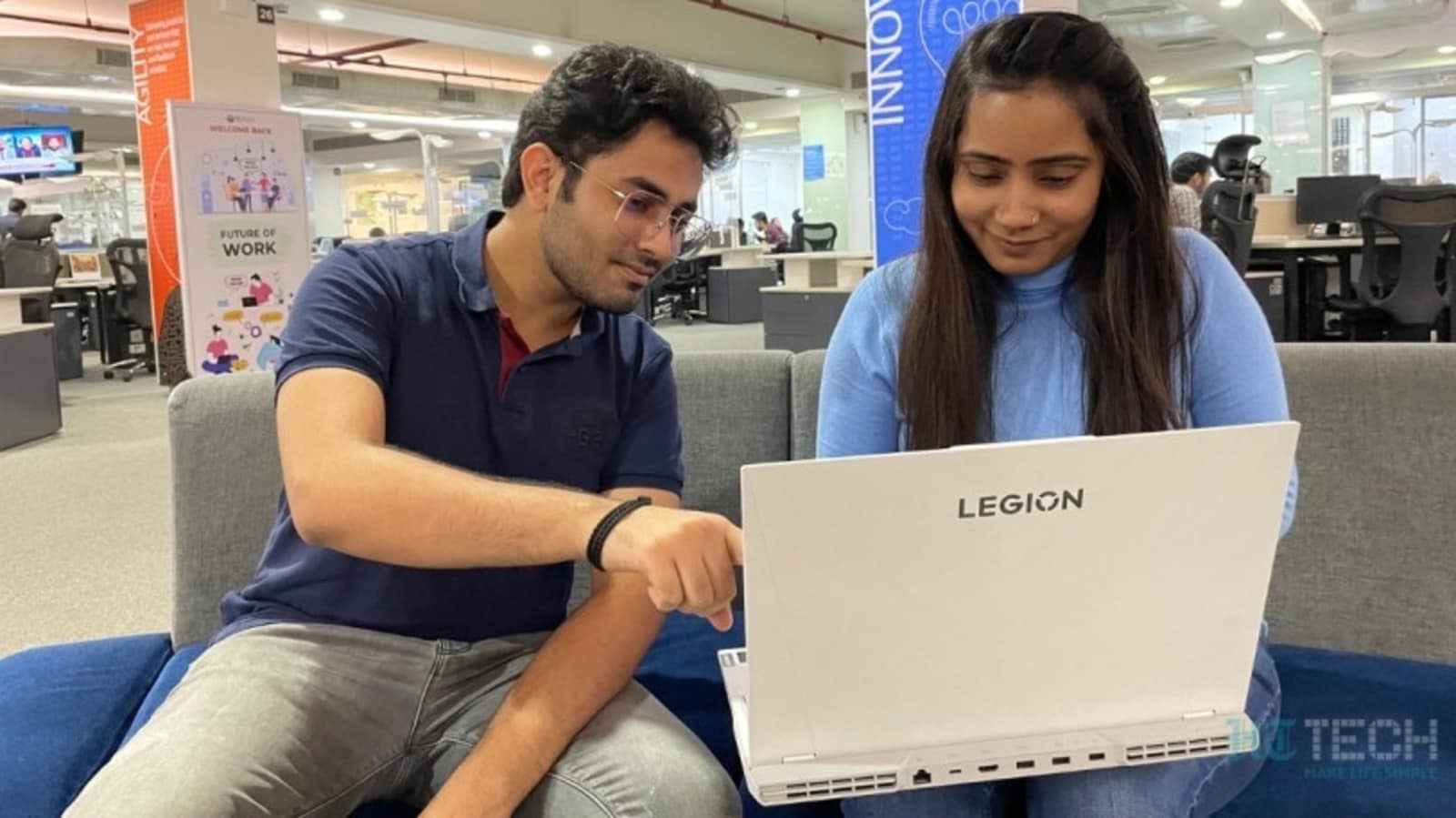 The Lenovo Legion 5i Pro is a powerful mid-range gaming laptop with Intel Core i7-12700H processor and Nvidia GeForce RTX 3060 GPU. But is it worth the attention of the gamers? Find out.

The word ‘gaming laptop’ evokes a clear image for us. We all imagine a big boxy device that is anything but aesthetically pleasing. We’ve all had to learn and live with the knowledge that gaming laptops can’t really be stylish because of all the big and expensive hardware that it comes with forces the companies to add some basic structure to the device. But Lenovo’s Legion series of gaming laptops has innovated even the design element of gaming laptops, and the Lenovo Legion 5i Pro continues the tradition.

And speaking of design, the laptop doesn’t skimp on performance either. With Intel Core i7-12700H processor and Nvidia GeForce RTX 3060 GPU, the laptop is a powerhouse that can handle most games, at least on paper. And after last year’s Legion 5 Pro, which received high praise in our review, expectations for the 5i Pro were understandably high.

So I’ve been using the device for over two weeks now and playing several mainstream games from Red Dead Redemption 2, Gotham Knights, Spider-Man Redemption for PC, Cyberpunk 2077 and more. It should be noted that my review unit came with an Intel Core i9-12900H processor and Nvidia GeForce RTX 3070 Ti GPU. These aren’t part of the pre-built laptops you get from retailers and you’ll have to pay extra to get a bespoke unit with these specs. As for the price, it will cost you Rs. 2,23,600.

I’m not sure which one
buy a laptop?

So let’s see if the Legion 5i Pro is worth the hype after all.

If you’re used to the designs of HP Omen or Asus ROG, the Lenovo Legion 5i Pro will pleasantly surprise you. It still retains hard edges and a boxy design, but the body has a smooth texture that just feels more premium. The chassis design and form factor are similar to the previous models, but instead of the Legion Y logo, you get the words written in metallic color, which I personally really liked. On the white body (which I got) it definitely catches the eye.

The form factor is also very solidly built and the surface is smudge and fingerprint resistant, which is great considering you get a slick metal body. The top lid gets an aluminum and magnesium alloy body and the deck is made of plastic, similar to the previous models in the series. I also like that the hinges are very stable and the screen doesn’t wobble noticeably. There is also no flex on the lid and keyboard.

The laptop offers a healthy set of ports for all your input-output needs. On the right side you get a USB-A 3.2 Gen 1 port, a headphone jack and a shutter for the webcam. On the left side you get a USB-C 3.2 Gen 2 and Thunderbolt 4 port. Everything else is neatly tucked away at the back, where you get two USB Type-A 3.2 Gen 1 ports, an HDMI port, an Ethernet port, a USB-C 3.2 Gen 2 port and the DC charging port.

Overall, the laptop looks professional and sleek and unlike most gaming laptops, it can also be easily used in office or education environments.

For gamers, a good screen is paramount and it is good to see that Lenovo has not cut corners on this. You get a 16-inch QHD+ IPS display with a 165Hz refresh rate. It also comes with an anti-glare coating, HDR 400 and a brightness of 500 nits. The display has a resolution of 2560 x 1600 and an aspect ratio of 16:10.

The screen is quite bright and displays a vibrant range of colors, making for a pleasant viewing experience whether you’re watching a movie or playing a game with a particularly dark setting, such as Batman: Arkham City. The colors feel crisp and lean slightly to the saturated side when left to the default color profile. As a bonus, it also comes with Dolby Vision and G-Sync from Nvidia, which makes for a great gaming experience in particular. You can also quickly switch between color profiles using the X-Rite Color Assistant.

I found the screen to be very responsive, although I should clarify that the only FPS game I played was Valorant, where the refresh rate was actually tested. Only minor complaint I have is that there is no shortcut to switch between different screen refresh rates. If you want to choose a lower refresh rate to get some extra out of the battery life, you have to do that manually from the settings.

With the reliable Intel i9-12900H processor and Nvidia GeForce RTX 3070 Ti GPU, the Legion 5i Pro leaves no chance to impress. I played several games on the device (as mentioned above) and the game didn’t shy away from anything thrown at it. I was able to run all games at high settings and high to very high resolutions, along with HDR support (where available). While games like Cyberpunk 2077 and Gotham Knights delivered high performance and the laptop could hold it for more than 4-5 hours of continuous gameplay (plugged in), an older GTA V ran extremely smoothly with almost console-like performance.

A small thing that you should keep in mind, however. While setting up the device, you will find an option in the BIOS setup to switch between the integrated low-performance Intel GPU and the Nvidia GPU. While the former will give you longer life, the latter will give you performance. Make sure you choose the right one here.

Lenovo Legion 5i Pro comes standard with Windows 11 and everything from productivity tasks to general use runs smoothly. Also, unless I was gaming or downloading a game in the background, the cooling fans never actually turned on.

My job involves a lot of typing, so I used the keyboard a lot. Much to my delight, it was an absolute pleasure to use them. It’s a full-sized keyboard with staggered keys, arrow keys, and even a numeric keypad. The keys have enough travel to give you the illusion of using a mechanical keyboard, and you’ll feel some finger fatigue after a few hours of typing. Although my device came with a white backlit keyboard, buyers will get zonal RGB lighting. One minor drawback is the lack of per-key lighting, which will cut down on some of the customization fun. The trackpad is also large and quite responsive, but the left and right buttons are quite difficult and pressing them can be quite tiring at times. We would definitely recommend buying a separate mouse with the device.

My only serious concern in terms of performance is the audio output. I found that neither the sound quality nor the loudness was satisfactory. Especially for a gaming device, it was a struggle to clearly hear even the dialogue in the cutscenes unless the room was completely silent. Finally, there is nothing to write home about the webcam. It’s a standard 720p camera and its performance is barely average.

Battery life of the Lenovo Legion 5i Pro

The Lenovo Legion 5i Pro comes with an 80 Wh battery that lasts about 3-5 hours with normal use. During gaming, however, this amounts to 1.5 hours. While my expectation regarding the battery life of a gaming device was never high, I definitely expected to get over 2 hours of gaming on it. However, it is never recommended to play games without being plugged in, so it shouldn’t be a problem.

But if you still want better battery performance from your gaming laptop, you can look at HP Omen 16.

The Legion 5i Pro shatters the notion that a gaming laptop can’t look good while working hard. The laptop is a beast in terms of performance, handling everything from normal office work to heavy gaming without breaking a sweat. The professional and minimalist look also adds to the appeal.

I think some improvements are needed in terms of speakers and battery life. But other than that, Lenovo shows no defects. If you’re a gamer looking for a laptop that can run more or less any mainstream game smoothly and look good doing it, you should definitely consider this one. But it costs Rs. 1,57,000 for all that and more than Rs. 2 lakh if ​​you want the RTX 3070 Ti and Intel i9-12900H upgrade. That’s a large amount and I’m not sure the extra CPU power is worth the price. However, if your usage requires that extra bit of power, this device could be of use to you.

But if not, you can also look at HP Omen 16, Acer Nitro 5 and ROG Strix G17, which offer more or less similar specs to the base model, but a different design aesthetic to choose from.