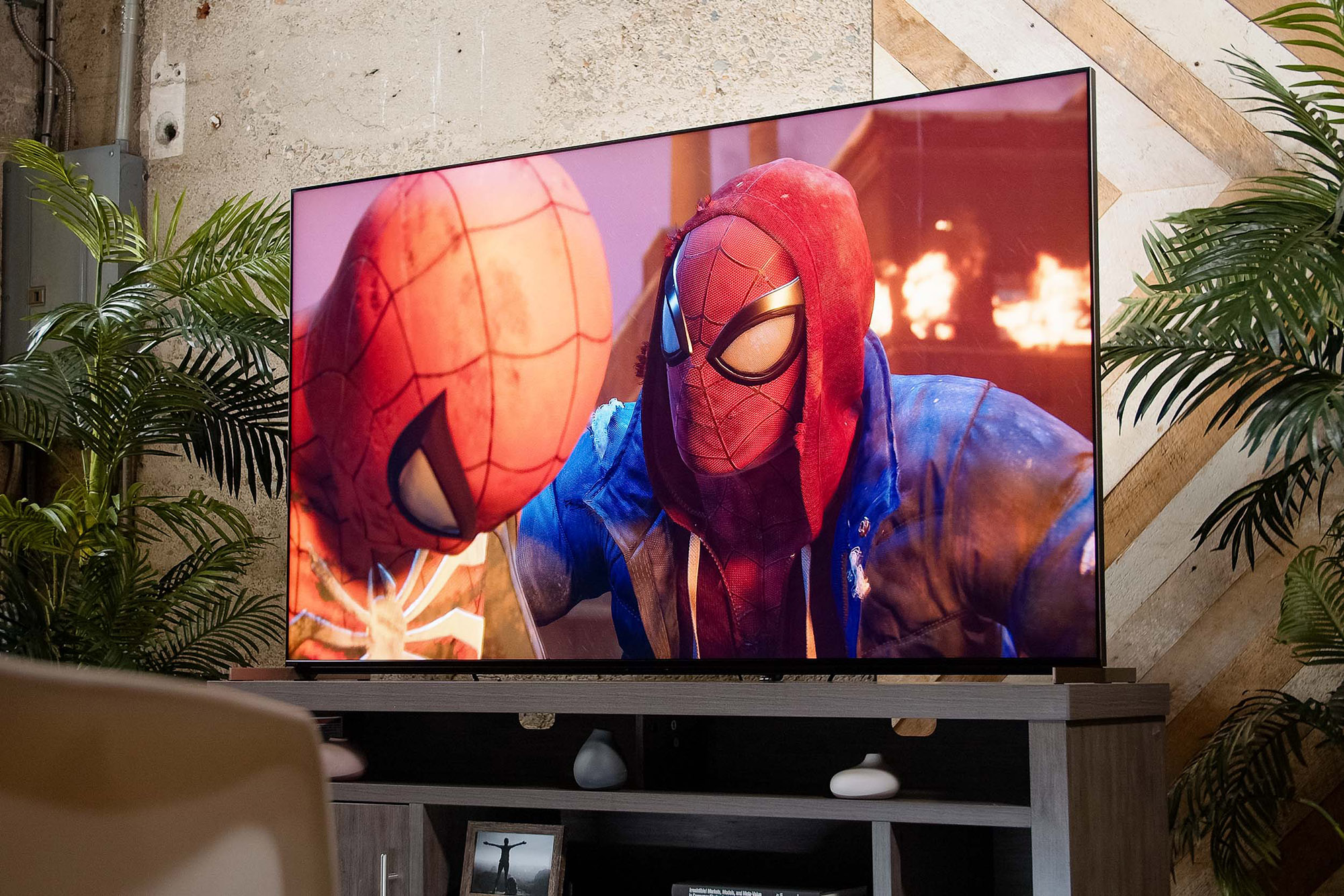 Whether you’re a hardcore gamer or only turn on your console a few times a month, you deserve a great gaming experience. And some TVs are just better for playing video games than others. If gaming is an important consideration when buying a TV, I’ve got a list of the models you’ll want to look at.

If you’re team Xbox, team Playstation, team PC, or team of all of the above, these are my picks for the best TVs for gaming in 2022. I’m going to list them for you and explain along the way which TVs do which things are best, so you can come home to the TV that suits you best. I have choices from budget friendly to sky’s the limit here so there is something for everyone.

Before I get to my first choice, I want to explain my criteria and how I weigh them up to arrive at the choices I’m about to walk down.

The first thing I look for is low input lag. Because if there’s too much lag between the action of your thumbs and the action on the screen, well, that’s just a frustration no one needs. Plus, it can be a huge disadvantage in competitive gameplay, where a few milliseconds can literally be the difference between winning or losing.

Next, I look for solid picture quality in the TV’s preset gaming mode, which is what you want to use for the lowest input lag. Picture quality doesn’t have to be great for videophiles, but it can’t be crap either. Today’s game graphics are gorgeous, and you deserve all that splendor, so we’re trying to find the best balance between low input lag and great visuals.

Then we should see great motion resolution. We do not to have to have native 120 Hz panels for good motion resolution. A 60Hz TV can look good, but not all of them do, so we want to make sure we see as little blurring and stuttering as possible for the best clarity during fast-paced gameplay.

But since I mentioned 120 Hz, that’s certainly nice to have, along with some other advanced gaming features like variable refresh rate (VRR), auto game mode, Dolby Vision gaming, and maybe even a refresh rate of up to 144 Hz in some cases. Now, for some of you, these are essentials, not nice-to-haves, so I’ll be sure to point this out.

I also give bonus points for extra impressive HDR and/or Dolby Vision performance, as well as add-on features like a gaming dashboard or gaming hub.

There are many other great TVs for gaming, but that’s kind of the problem. It’s hard to narrow it down when you’re shopping – that’s why I’m only highlighting my favorites here.

With that, let’s run down the list, starting with some budget-friendly options and working our way up to the best of the best.

My top pick for a budget-friendly gaming TV is the TCL 5 Series. This is a TV with local dimming for better black levels and decent contrast, HDR10 and Dolby Vision support, and very low input lag, between 12 milliseconds and 15 milliseconds. It’s a 60Hz panel, but it does offer a variable refresh rate between 48Hz and 60Hz, which is rarely seen at this price point. It has pretty good motion resolution and a Black Frame Insertion feature that can reduce blur, if you’re into that sort of thing. Best of all, though, the image quality is excellent for this price. This really is one of the best deals out there, although I also have to praise the Hisense U6H for being very competitive at around the same price.

Next on the list at the budget level is actually a tie. These are two excellent TVs overall, both great for gaming and both ridiculously well priced for their picture quality: the Hisense U8H and the TCL 6 series.

Both offer impressive picture quality with solid motion resolution, both use mini-LED backlighting and have some dimming zones for great contrast and HDR performance, both offer very low input lag and support generic VRR and FreeSync, and both have 120Hz panels, though PC gamers may prefer the TCL as it can go up to 144 Hz in VRR. The Hisense U8H does get a little brighter than the TCL 6 series, but the TCL tends to upscale a little better than the Hisense. In the end, the deciding factor may be which Smart TV interface you prefer, as the TCL 6 Series is a Roku TV, while the Hisense U8H uses the Google TV platform. Either way, these are definitely the two best value for money options on this list.

Next up is a TV that’s on the list for no other reason than because it’s a Sony. Check out the Sony X90K with PlayStation 5-friendly features you won’t find on non-Sony TVs. It features auto-HDR tone mapping, which ensures you get the best HDR image quality without having to manually adjust anything on the PS5. It also has automatic genre detection, which knows the difference between a game you’re playing and a movie you’re streaming, and adjusts the picture mode automatically. It supports 4K 120Hz gaming with VRR and input lag down to just 8.5ms. With mini-LED backlighting and some of the most accurate color in game mode at or around this price point, the Sony X90K is a great choice for gaming in general, but especially a good choice for PlayStation 5 enthusiasts.

We have now arrived at the Samsung QN90B TV. Now I could have placed the slightly cheaper QN85B here, but I think the QN90B makes the most sense, because for a little more money you get much more image quality. And from there, the game-friendly features pile up. This mode; features mini LED backlighting, some of the best backlight control on the market for minimal blooming and amazing black levels, some of the best glare reduction, four full-bandwidth HDMI 2.1 ports for 4K 120 Hz, VRR, auto game mode and automatic console detection – it will automatically name your entry. But what sets this TV apart most from the others is that you don’t need a game console or PC at all, as Samsung supports the widest range of cloud gaming apps, including Xbox Game Pass. Really, the one thing this TV can’t do is Dolby Vision.

OK, we’ve worked our way up to the best of the best here, and my final pick is hands down the absolute best gaming TV money can buy… but finishing second is another Samsung TV, one that has the best overall picture quality on this list: I’m talking about the Samsung S95B QD-OLED TV.

Now QD-OLED is a new type of OLED display that can produce more colors and brighter colors than any other TV on this list. Actually, only the Sony A95K QD-OLED can match this. But the Samsung S95B has all the great gaming features I mentioned earlier with the QN90B. Low input lag, great motion resolution, cloud gaming options, 4 HDMI 2.1 ports, 4K 120Hz, VRR, a gaming hub – the only thing it can’t do is Dolby Vision. But with image quality like this, I’m not sure you care.

This television has it all. It’s the only TV on this list with every gaming feature under the sun – 4 HDMI 2.1 ports, 4K 120Hz with G-sync VRR in Dolby Vision – all at the same time, if you can find the content. Plus, it has a fun gaming dashboard for nerdy performance stats, as well as incredible image quality, instant response time, and ultra-low input lag. The LG C2 is the total package, and nothing beats it – except maybe the LG C1 OLED, and if you can find one, grab it and save some cash.

Anyway, you don’t just get what I think is the best gaming TV out there, but one of the best TVs you can buy right now, period. That makes it a universally great option for anything you want to watch. You’re gonna love it.