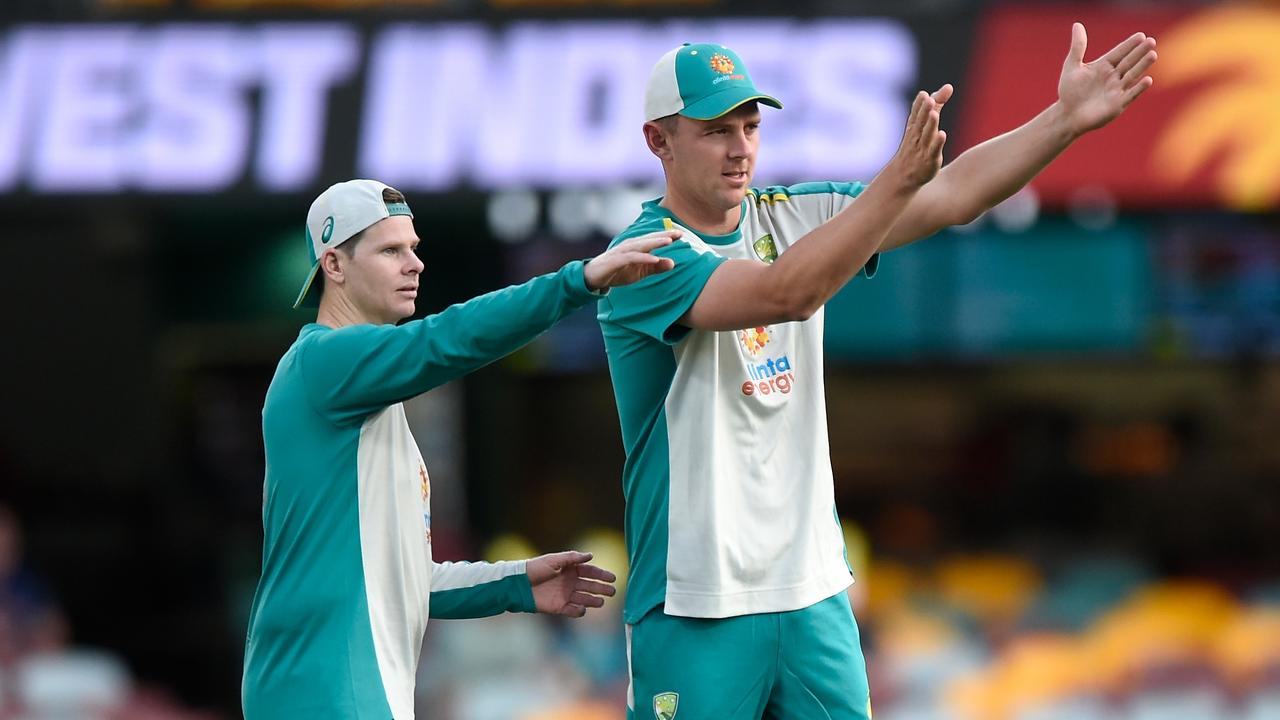 Australia was sent into the Gabba after bringing Steve Smith back into the lineup to take on the West Indies.

Aaron Finch was on the list to open, but instead Dave Warner teamed up with Cameron Green to top the order.

In the original order, Finch was second followed by Smith and Glenn Maxwell.

Mitch Marsh goes off the side after he manages to fly to Perth to avoid the tight turnaround for Sunday’s clash with England, where Australia’s first-choice bowlers will not appear.

The West Indies won the toss and chose to bowl first, and the move paid off as Cam Green went early for just one shot.

The young West Aussie had to go after firing just four balls, having shot it off Alzarri Joseph’s bowling alley.

Aaron Finch, promoted to number three after coming out in game one in four, survived a review on the second ball he encountered.

Finch was hit on the pad by a swinging Kyle Mayers delivery, but replays showed the ball went down.

He survived another scream moments later when the ball hit his thigh protector.

Finch even tried to play a ramp and got him off the toe of the bat, but landed safely when he went to 2* from nine balls.

On the other hand, it was Warner who sanctioned the attack on the West Indies.

He had the first six of the innings left in the fourth when he raced to 25* on just 13 balls.

The West Indies’ tactics were called into question when both Alzarri Joseph and Jason Holder got just one over before being taken off the attack.

“I think the only bowler who doesn’t want to face Finch is Joseph.”

Previously, Michael Clarke criticized the Australian selectors and team officials, saying they are “burning” Steve Smith and “shooting themselves in the foot” by playing Cameron Green for the T20 World Cup.

Clarke, who won the ODI World Cup in 2007 and later led Australia’s victorious campaign at the 2015 domestic tournament, didn’t mince words on Friday morning, believing they had got their selection wrong for the T20 World Cup. of this month.

It comes after Smith was left out of Australia’s T20 against the West Indies on Wednesday night, with Green opting to open the pack despite not being selected in Australia’s World Cup squad.

In addition to Smith’s failure, Captain Aaron Finch slid down to hit number 4.

Finch, who scored a timely 58 in Australia’s three-wicket win, revealed it was his decision to drop the order so Green could pick up where he left off after a standout run in India.

In the game, Mitch Marsh also returned to the Australian line-up, albeit only with a punching capacity, while Marcus Stoinis is set to return against England in Perth on Sunday, with selectors eager to see how the all-rounder progresses. after his own injury setback.

But Clarke said Australian officials got it wrong by not allowing Smith more time in the middle, believing everything had to be done with the World Cup in their sights.

“My theory is that Mitch Marsh wasn’t bowling so they had to choose Cameron Green over Steve Smith to give us an extra bowling option, but what they’re doing right now is shooting themselves in the foot,” Clarke said on the website. . Big sports breakfast.

“The most important thing at the moment is that we are preparing for this World Cup… so Steve Smith’s form in Twenty20 cricket has not been as good as he would have liked in recent years. He has to play.

Clarke said Australia was too cute for their own good, believing they should support those in the World Cup squad for now.

“I think they’re preparing for both scenarios. If Marcus Stoinis is fit, he’s in the World Cup roster…If Stoinis is fit, Cameron Green can’t get in the roster, so that’s their plan A,” he said. he.

“If Stoinis is not fit then Cameron Green will come on the squad so they try to have their pie and eat them – OK while Stoinis is not playing get Cameron Green some cricket and bring him in but what they do bring in Smithy burn by doing that because he’s not getting any cricket.’

Clarke added that the push to give Green as much cricket as possible was an example of selectors getting his exclusion wrong.

The former batter also backed Smith to shine in the tournament, believing his quality would shine on the biggest stage.

“(It looks like) if Cameron Green is in the squad, he will be in the starting line-up. That tells me they made a mistake,” he said.

“They should have put him in the squad.

“He will find a way to make runs, he is too good a player in any format, especially in a World Cup.”

Smith, meanwhile, had been downplaying his exclusion from the opening game, pointing to the depth in the squad.

“We have really good depth in our squad,” Smith told reporters on Thursday.

“Tim David came in and did a really good job. Everyone is in a good place. So we wait.

“People are talking about matchups for different oppositions and circumstances – we have a really good roster so we can pick it accordingly… we have options however we go about it.”

Follow all the live action in our blog below!