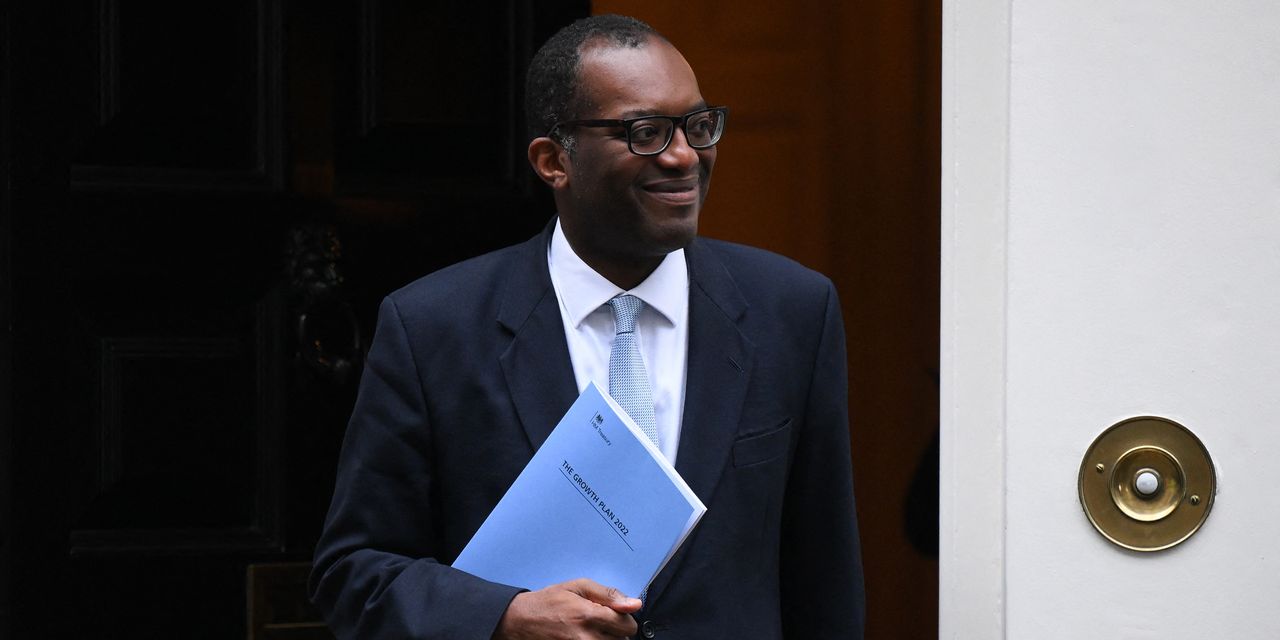 About the author: Leslie Lipschitz is a former director of the IMF Institute, taught at Johns Hopkins University and Bowdoin College, was a visiting scholar at the Brookings Institution and an advisor to Investec Asset Management.

The turmoil in the financial markets in the United Kingdom, accelerated by the policy statement of Finance Minister Kwasi Kwarteng on September 23, raises two questions.

First, in an open economy with advanced financial markets, can a central bank both curb inflation and ensure financial stability in conditions of fiscal debauchery? One aspect of this question is a somewhat new and more complicated twist on the old problem of “fiscal dominance” – fiscal policies requiring central bank compliance – that undermine monetary policy. But now, instead of governments directly undermining monetary policy, their statements affect financial markets and restrict central banks for fear of instability.

Second, has the transfer of macroeconomic policies to the real economy become highly unpredictable? The conventional macroeconomic effects of fiscal initiatives can be dominated by erratic risk premia and asset price volatility; monetary policies aimed at curbing inflation through conventional credit market effects can be strengthened or reversed by asset price movements, wealth effects on demand and/or financial instability.

The policy action and turnaround in the UK economy between September 21 and October 3 was clearly dramatic (rather than just beginning), but not entirely new. They forced the Bank of England to tackle issues similar to those the European Central Bank had anticipated a few months earlier: that is, how to counter inflation with higher interest rates without a financial crisis in vulnerable parts of the country. risk the financial market.

The chancellor’s statement came shortly after the government announced spending increases designed to ease the burden of rising energy costs on households and businesses. The statement outlined planned tax cuts and other changes aimed at boosting economic activity growth. The measures would be financed by additional loans and the statement was not accompanied by official cost estimates. Two days earlier, the Bank of England had raised interest rates by 50 basis points – a significant figure, but less than the Fed’s 75 basis point rise in the same week, despite the UK’s even more troubling inflation outlook. The bank’s immediate response to the Chancellor’s statement was to announce that it had no monetary policy measures in mind until its next meeting in early November.

While the Chancellor’s statement hardly resembled the recipe for financial collapse, there were some obvious problems.

First, growth of the UK economy has been constrained by the supply side by most estimates. Lacking sufficient spare capacity to generate a significant real supply response, the additional demand would likely push prices further in an already highly inflationary environment. The Chancellor’s statements failed to produce credible and significant supply-side improvements for the foreseeable future. Certainly, tax cuts – for both households and businesses – and additional capital deductions would in themselves be positive on the supply side over time; but they wouldn’t have much of an effect in the limited, low-growth environment likely to prevail in the near term. Strengthening the supply side of the UK economy – specifically raising labor productivity, which is below the levels of France, Germany and Italy – would require more detailed microeconomic policies than the Chancellor’s.

Second, the global context of the envisaged measures was problematic. Conventional wisdom is that, all other things being equal, fiscal easing coupled with monetary tightening should lead to higher interest rates, actual or incipient capital inflows and an appreciation of the currency. But for the United Kingdom, the assumption that all other things are equal did not apply. The monetary tightening in the UK took place in the context of similar, if not more aggressive, tightening elsewhere. As explained below, higher bond yields in response to inflation expectations for the UK could also have very problematic implications for financial stability. Not surprisingly, sterling fell sharply rather than rose.

Third, the measures would worsen the fiscal outlook. The UK’s National Institute of Economic and Social Research estimated that the tax cuts, along with announced additional spending, would widen the deficit by about five percentage points of gross domestic product and reverse a projected decline in the debt-to-GDP ratio. But even after these deficit and debt-increasing measures, the UK government debt-to-GDP ratio would still be lower than that of the US and major European countries (except Germany). Surprisingly, the International Monetary Fund quickly joined the chorus of criticism of the chancellor’s statement, despite having supported expansionary fiscal measures in other economies with similar supply constraints, inflationary risks and even more alarming public debt ratios.

Of course, the UK is not the US Sterling that lacks the safe haven status afforded by the dollar. And, as recently demonstrated by the European Central Bank, even the most fiscally vulnerable countries in the euro zone – Italy and Greece – are benefiting from the possibility of some currency zone safeguards. But there is no such guarantee for the UK. The monetary policy of the Bank of England was insufficient to convince the markets that the inflationary effects of the fiscal initiatives would be offset. The bank’s initial apparent complacency boosted expectations of higher inflation and, along with additional government borrowing, meant an almost certain decline in the price of longer-dated government bonds (“gilts”). A gap opened under both the gold price and the value of sterling.

It is useful to discuss the special circumstances of the UK.

London is a global financial center. The UK financial sector, which is very large relative to GDP, comprises a significant industry for pension funds. Over the many years of low interest rates, pension funds had used their gold holdings to collateralize purchases of bonds and interest rate derivatives that would effectively give them the leverage to invest in other, less liquid, higher-yielding assets while still appearing to fit the bill. structure of their pension obligations. But a jump in government bond yields coupled with fears of further gains – equating to a drop in the market-based prices of the gilts used as collateral – forced the sale of these bonds to meet margin calls. Of course, a wave of such sales – a crowd rushing to find a narrow exit – exacerbated the downward pressure on gold prices (the upward pressure on yields) and threatened a vicious circle with hugely detrimental effects on the stability of gold. the financial sector and the economy more generally.

Within hours of the bond market turmoil, the bank made an effort to limit the damage by directly intervening in the bond market. It immediately reversed its policy of quantitative easing — that is, selling bonds as part of a policy to clear liquidity and fight inflation — and committed to up to five billion pounds (about $5. 6 billion) in long-term bonds every day for the next thirteen weekdays. In fact, the bank was now guarantor for gold prices. As anticipated, this move allayed fears and halted the rise in bond yields, at least temporarily, with the bank’s actual purchases well below the set ceiling. A few days later, the government reversed the most controversial part of the Chancellor’s statement, the cut in tax rates for high-income earners. This change is politically important, but quantitatively trivial. Nevertheless, a certain amount of calm has been restored. It could well give pension funds the time it takes to unwind dangerous leverage.

The UK stands out for its huge financial sector, the site of its immediate problems. But this recent experience should draw attention to two more broadly applicable issues: the ability of central banks to simultaneously contain inflation and prevent financial crises, and the difficulties of measuring the impact of monetary policy measures.

On the first issue, history in recent days clearly shows that central bank policies cannot be separated from fiscal rulings that affect financial stability. Despite the current calm, the UK’s fundamental problems remain. The government’s reversal of an element of the tax cuts still leaves a significantly weaker fiscal outlook. The bank has calmed the initial turbulence in the bond market, but should it resurface, it would be faced with a dilemma: how to inject money into the economy to support the bond market while taking a stance that is restrictive enough to reduce inflation? and undergird sterling? This problem of having one instrument and two objectives goes further than the British central banks have tried to solve through regulation of the financial sector. But regulation is static and financial innovation is dynamic. We will see repetitions of the dilemma of central banks trying to cope with reducing inflation and avoiding financial instability. Without the cooperation of the tax authorities, this could turn out to be an impossibly narrow passage.

The second issue – the difficulty of assessing the impact of monetary policy action – is illustrated by the market’s response to the Bank of England’s initially seemingly complacent response to the Chancellor’s statement and the subsequent turnaround by the bank. More broadly, the problem has been exacerbated by the massive accumulation of debt – on corporate, government and central bank balance sheets during the recent low-interest years – and by the build-up of household financial assets. These developments have changed the transmission of monetary policy. In addition to conventional credit effects, the impact of monetary tightening has increased due to financial market fragility, exchange rate implications, negative wealth effects on household spending and balance sheet risks for businesses and governments. The effects of monetary policy are therefore extremely difficult to estimate. Central banks are largely blind.

Guest comments like this are written by authors outside of the Barron’s and MarketWatch newsroom. They reflect the perspective and opinions of the authors. Submit comment suggestions and other feedback to [email protected].