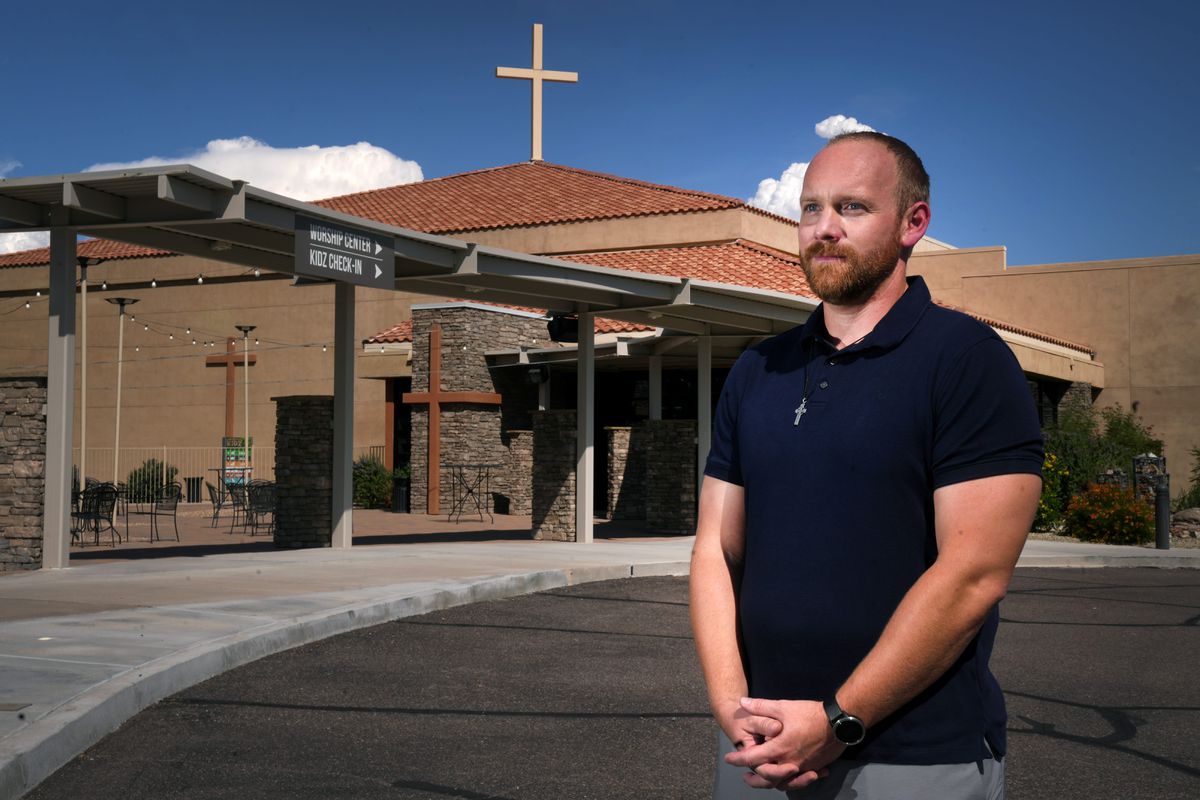 You can think of Donald Trump’s staunchest supporters as bigots or patriots, constitutional standard-bearers or misguided masses. Caleb Campbell likes to think of them as stray sheep. He has made it his business to lead them back.

Mr. Campbell is a pastor at Desert Springs Bible Church in Phoenix. But for most of the past year, he has been an undercover man, using his pastoral credentials to gain access to the shrines where faith in the former president has been cultivated.

It has given him a privileged vantage point of the new ways religion is being used as a substitute for politics among some of Mr. Trump’s most ardent supporters, who have sought to expand support among pastors and parishioners alike.

mr. Campbell’s introduction to Trump’s congregation took place in a church, after fellow Christians suggested they participate in what was described as a revival event organized by Turning Point, a Phoenix-based conservative group.

“I was absolutely terrified and horrified,” recalled Mr. Campbell himself. He was in a familiar environment: people gathered in a church singing Christian worship music, with a prayer and a fundraiser.

But the person delivering the homily was not a minister. It was Charlie Kirk, a high school dropout who has become a prominent conservative broadcaster and a key figure in spreading and sustaining the new American wave of populist conservatism. He talks “as a minister would talk,” recalled Mr. Campbell himself.

That includes taking the Bible to the pulpit. Mr. Kirk frequently refers to the Book of Jeremiah where the 29th verse says “seek the peace and prosperity of the city.” mr. However, Kirk replaces “seek” with “demand,” a term that becomes the basis for him to advocate, Mr. Campbell said, for a proclamation of “why we need to demand our gun rights and demand choice of school.” .”

That biblical text “has absolutely nothing to do with gun rights and school choice,” Campbell said. “This is ancient Israel in Babylonian captivity.”

Mr. Kirk founded Turning Point USA and, in 2021, TPUSA Faith, which hosted some of the events that Mr. Campbell attended. Mr. Kirk calls the separation of church and state a lie, saying that “the church founded this country” and must “stand up in every capacity” today. TPUSA Faith’s ambition is to gather and organize religious leaders, providing them with resources “to activate their congregations to fight for free people, free markets, free speech, and limited government.”

Listening to that message, Mr. Campbell became uneasy. “What was shocking to me was that people in the room raised their hands and said, ‘Amen. Hallelujah.’ They had a religious experience.”

In the following year, Mr. Campbell spent more than 1,000 hours immersing himself in that world, watching videos, reading literature, attending a biblical citizenship course, and visiting a posh resort with 500 ministers, their bills covered by an unknown donor.

He liked much of what he heard, such as the emphasis on patriotism and honorable service, hard work and charity.

He also saw those principles being distorted to instill fear that this way of life is under threat — be it ethnic minorities or liberal elites.

“They are afraid that the outsider will take over and destroy their lives. It’s the erasing part that poses the biggest threat,” he said. He came to understand Trump’s “Make America Great Again” as “a call for ethnic preservation,” under the guise of defending a Christian nation.

In a statement, Andrew Kolvet, a spokesperson for TPUSA Faith, said the organization “condemns political violence. To suggest the contrary is irresponsible and disappointing.”

“The truth is that Jesus himself was an outsider, and all people, regardless of race or background, are welcome to be a part of what builds TPUSA Faith,” said Mr. Kolvet. Mr Kirk, he said, quotes Bible verses that are “instructive for modern Christians to take an active part in the welfare of their cities and homes”.

American religious leaders have been advocating conservative political activity for decades, through the religious right, the moral majority, and the Christian coalition.

What sets the new brand of Christian nationalists apart, Mr. Campbell said, is tenor and tone. “This is a petty, vulgar power grab with violent rhetoric,” he said. He grew up a Christian conservative, although he rebelled against his upbringing by becoming a neo-Nazi skinhead in high school. “I’m familiar with what it means to be cultivated toward violent behavior,” he said.

Across the US, moderate Republicans within their own party have struggled against election denial and culture war politics.

“It’s always a danger when you confuse politics and policy with prayer,” said Kathy Petsas, a leader of the Arizona Republican Party.

Ms. Petsas was party leader in a legislative district that spawned icons of modern conservatism, including Barry Goldwater, Sandra Day O’Connor and John McCain. After Mr. Trump contested his 2020 loss in Arizona, she began seeing large numbers of America First supporters seeking to become members of the district committee, a local party official. She met 132 of them for coffee. About half believed Mr Trump had been denied victory by electoral fraud.

Those conversations often felt like a psychological intervention. “You had all these delusions,” she said.

Ms Petsas, a practicing Orthodox Christian, was surprised by people offering prayers at party rallies “where they refer to the left as the demonic left. It is unconscionable to me that they are appropriating religion for their own political gain.”

Mr. Campbell’s initial efforts to push back were unpopular with his white, evangelical, and suburban parishioners. His congregation shrank from 800 to 300. He began writing a book about engaging the “mission field” of new religious conservatism—and began attracting new congregants, whom he describes as “disheartened, if not disgusted, with the amalgamation of nationalism and Christianity.”

He has created a toolbox for reclaiming the souls of the Trump Church. He begins by establishing personal confidence, without which people tend to resist questioning their own beliefs. He encourages people to fast for two weeks through the media. And he invites them to sit down with others with a different opinion to discuss hot-button issues such as immigration.

Debating about facts and figures is pointless, he says. Better to understand the fears and angers that fuel personal beliefs.

It is slow and intensive work, but those who have accepted his intervention have expressed their relief when they emerged. “People say, ‘I’m not that anxious. My blood pressure has definitely dropped. My heart rate is slower.'”

However, it has proved difficult to overcome relationships broken by the fervor of the new law. None of the people Mr. Campbell has worked with would agree to speak to The Globe and Mail. Detractors have called Mr Campbell a fascist, a Marxist and “a leader with a Luciferian spirit of fear”.

But Mr. Campbell says he is driven to counter what he sees as a false doctrine of power, one that confuses political and religious kingdom-building. Such an idea is not new to Christianity, he said, pointing to Rome under Constantine and Charlemagne.

“It’s an eternal heresy,” he said. “This one is just sprinkled with red, white and blue. This one tastes like apple pie.”